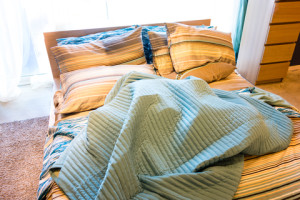 If you make your bed every morning, you’re in a minority. According to a survey of 68,000 people by Hunch.com, only 27 percent reported making their bed, while 59 percent said they do not (another lucky 12 percent paid someone to make their bed for them).[i]

You may assume that it’s generally a good thing to make your bed, even if you don’t actually do it. Your mother probably told you to make yours, after all, and it certainly looks tidier, especially if unexpected company shows up.

But if you refuse to make your bed, here’s a good reason to support your habit (keep this one up your sleeve for all of those messy bed naysayers in your life).

A Made Bed Makes a Perfect Home for Dust Mites

The average bed may be home to 1.5 million dust mites. These tiny creatures (each is less than 1 millimeter long) don’t bite or burrow into your skin, but they do feed on your dead skin and hair. This is gross, though not particularly dangerous.

However, dust mites also poop in your bed, and their fecal pellets, as well as their body fragments, create an allergen that can be harmful to people with allergies and asthma. It’s estimated that 10 percent of Americans are sensitive to dust mite allergen.[ii]

Now here’s the thing about dust mites. In order to survive they use small glands on their bodies to soak up water from their environment. During a night of sleep, the dampness of your nice warm sheets (however slight it may seem to you) provides just the type of environment dust mites love.

In the morning, if you jump out of bed and quickly make it again, you’re preserving that damp, warm environment that makes dust mites thrive. On the other hand, research by Dr. Stephen Pretlove of Kingston University London found that leaving your bed unmade allows the moisture to dry out, which means the dust mites become dehydrated and eventually die.[iii]

If you simply can’t stand an untidy bed, at least leave your bed unmade while you shower and have breakfast. This should give it sufficient time to air out before you put the covers back into place.

The Case For Making Your Bed

Dust mites aside, there are many good reasons to consider making your bed each morning if you don’t already. Among them are happiness and well-being. Remember that Hunch.com survey? It also found that bed makers are more likely to be happy than non-bed-makers (71 percent versus 62 percent, respectively). And according to Psychology Today:[iv]

“Bed makers are also more likely to like their jobs, own a home, exercise regularly, and feel well rested, whereas non-bed-makers hate their jobs, rent apartments, avoid the gym, and wake up tired. All in all, bed makers are happier and more successful than their rumple-sheeted peers.”

Making your bed also gives you a sense of accomplishment first thing in the morning. Your morning routine sets the tone for the rest of your day, so you might as well start out on a productive note. Elite Daily reported a nice little quote from Naval Admiral William McRaven at a University of Texas, Austin commencement speech:[v]

“If you make your bed every morning, you will have accomplished the first task of the day. It will give you a small sense of pride and it will encourage you to do another task and another and another. By the end of the day, that one task completed will have turned into many tasks completed. Making your bed will also reinforce the fact that little things in life matter.”

A National Sleep Foundation poll even found that people who make their bed every day or almost every day are 19 percent more likely to say they get a good night’s sleep (and in this poll 88 percent made their beds at least a few days a week).[vi]

New York Times best-selling author on happiness Gretchen Rubin also told Elite Daily that bed making is the habit people mention most often when asked what led to their happiness. She said:[vii]

“It’s a pretty trivial thing, but over and over people say that getting control of this little action makes them feel more in control of their life, generally.”

Considering it only takes a minute, why not try it out and see if this is true for you? (But only after letting it air out first! Dust mites … eww.)