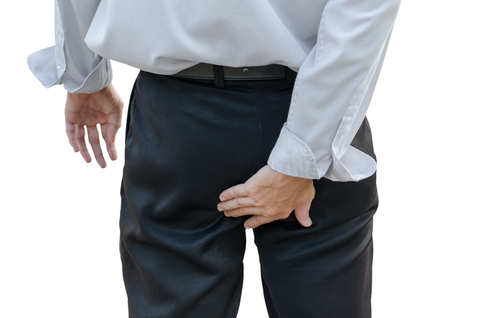 Hemorrhoids can cause a lot of problems. The problems form in critical parts of the body, exposing it to exceptionally harmful circumstances.

In addition to being itchy and painful, hemorrhoids halt the body’s normal functions. With all the damage hemorrhoids can do, the question remains what impact, if any, do hemorrhoids have on back pain?

To determine whether hemorrhoids cause back pain, it’s essential to look at what hemorrhoids are and how they interact with the body. Hemorrhoids can be broken down into two categories:

If these hemorrhoids do not heal quickly, the damaged veins can cause additional health problems.

Do Hemorrhoids Cause Back Pain?

From a scientific perspective, the link between hemorrhoids and back pain is dubious. Some have speculated that hemorrhoids require so much blood that they drain blood from other sources. Such instances they claim may cause back pain in muscular regions of the back due to a lack of blood flow.

The other possible connection between hemorrhoids and back pain is the location. People often complain of hemorrhoid pain near the tailbone because hemorrhoids grow near their tailbone. Such growths can cause sufferers to equate hemorrhoids pain with tailbone pain, thus establishing a back pain connection. Again, both connections are dubious and not scientifically founded.

Either way, when suffering from both back pain and hemorrhoids, consult a doctor, but be wary of drawing conclusions about hemorrhoids causing back pain. Other underlying problems are more likely.

35 thoughts on “Can Hemorrhoids Cause Back Pain?”