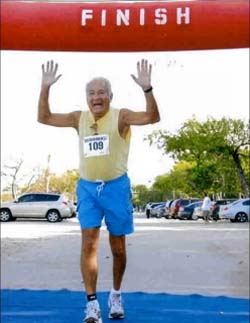 Michael O’Toole has run 35 marathons. This spring he placed 3rd in a 5K race.

That doesn’t sound very impressive… until you realize that Michael is 77 years of age. Or 77 years young as he would say.

More than that, after dealing with leg pain for the past two years that doctors and chiropractors couldn’t help, a neurosurgeon recommended surgery for the condition an MRI found: spinal stenosis.

A second opinion from another neurosurgeon ended with the same recommendation. Michael would need an operation to relieve his spinal stenosis pain.

Fortunately for Michael, that second opinion was not enough. His search for a better option eventually helped him find one… right here at the Healthy Back Institute.

Even Michael admits that his success story of how he got relief from his spinal stenosis pain sounds like a paid endorsement for us. But we assure you it isn’t. Michael is a real-deal former pain sufferer who looked for an answer, and more importantly, took action when he found it. As a result, Michael now has his life back… and has canceled any plans for surgery! Congratulations Michael — you’re an inspiration to us!

Learn more about the products that helped Michael:

Lose the Back Pain

The 7-Day Back Pain Cure