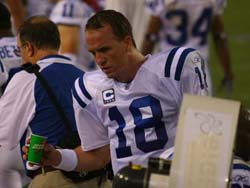 Indianapolis Colts football fans were shocked and saddened Sunday when Peyton Manning had to sit out the season opener due to neck pain.

Manning had neck surgery on May 23rd to help pain from a bulging disc. After over three months of “recovery time” he was able to return to the practice field on a limited basis for two days last week, only to be sidelined again by related back pain and weakness in his arm.

Sadly, while many doctors including Manning’s try to cut away back and neck pain, the truth is most herniated discs can be healed without surgery. Which is a good thing since these kind of neck and back surgeries are notorious for failing to relieve pain altogether.

Although most neck pain is caused by long-term muscle imbalances, even neck pain from injuries such as those sustained in head-on collisions playing in the NFL can be relieved — if you know how. That’s what you’ll discover in our Lose the Neck Pain system. It has an amazing 93% success rate which far exceeds any other neck pain relief method we’ve heard of including doctors, therapists, and neck surgery.

We wish Peyton Manning a speedy recovery. In the meanwhile, if he or anyone else with neck pain would like to ensure their own recovery without going under the knife, our door is always open!

UPDATE: Peyton Manning did recover despite multiple surgeries thanks to a novel stem cell therapy approach. Learn more about his road to recovery in our post:

Try the Neck Pain Cure with a 93% Success Rate!