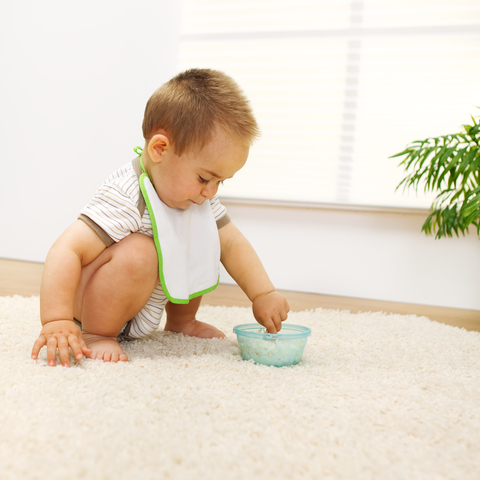 If you drop a piece of food on the floor, the ‘5-second rule’ states that it’s safe to eat as long as you pick it up within 5 seconds. But is this rule, a favorite on schoolyards, really true?

Most often, no. Bacteria can cling to your food nearly the second it hits the floor, so you risk eating bacteria (and potentially contracting a gastrointestinal disease) anytime you eat food off the floor.

What Happens When Bologna is Dropped on the Floor for 5, 30 or 60 Seconds?

Scientists have actually looked into the 5-second rule to see whether it’s fact or fiction. They put salmonella bacteria on wood, tile and carpet, then dropped bologna onto them for 5, 30 or 60 seconds. The length spent in contact with the surface had little impact on the amount of bacteria transferred, but the type of floor did. On wood and tile, more than 99 percent of the bacteria transferred to the bologna virtually on contact, while the carpet transferred far fewer bacteria.[i]

“S. [Salmonella] Typhimurium can be transferred to the foods tested almost immediately on contact.”

So will eating food off the floor make you sick? It just depends. You might get lucky and be just fine, or you might happen to pick up a bacterial, or other, infection (in the case of salmonella, for instance, just 10 bacteria can make you sick[ii]).

Foods with wet or sticky surfaces would be expected to pick up more bacteria than dry foods when they hit the floor, but researchers testing this matter revealed some surprising facts about which foods actually accumulate more bacteria.

Five foods — bread with jam, cooked pasta, ham, a cookie and dried fruit — were dropped on the floor for 3, 5 or 10 seconds, then tested to determine their bacterial growth. The dried fruit and the cooked pasta fared the worst, with signs of klebsiella bacteria and yeast after just seconds on the floor. On the other hand, the following foods showed few signs of bacterial growth:[iii]

“Eating processed food from the floor poses the lowest risk – one of its few benefits – given that it generally contains such high levels of sugar and salt,” Mail Online reported.[iv]

What are the Dirtiest Surfaces?

If you want to hedge your bets when you drop your favorite chocolate bar, deciding whether or not to eat it, you might want to factor in where you drop it, as some surfaces tend to be germier than others. The following surfaces, for example, are all generally dirtier than the average toilet:[v]

So, it’s not only the floor that’s an issue … if you drop a piece of food and it lands on your keyboard, your cell phone or your remote control, eating it might not be worth the risk.

If the idea of picking up ‘germs’ grosses you out, it shouldn’t, as you have about 100 trillion bacteria living on and in your body right now. Many of these are beneficial and you couldn’t live without them, though most of us have also accumulated our fair share of toxins that are also trapped in our bodies.

For instance, you could have anywhere from five to 20 pounds of hardened fecal matter clogging your colon, leading to inflammation in your gastrointestinal tract that allows the trapped toxins to leak into your bloodstream. The resulting symptoms — skin problems, allergies, low immunity, trouble sleeping, premature aging, food cravings, headaches and more — are often confused with other issues while the toxins continue to fester unchecked in your body.

It’s a good idea to regularly flush your colon of accumulated toxins, using a gentle formula like Natural Cleanse, so that your body can heal and become re-balanced for optimal health and vitality. You’re going to be exposed to bacteria, germs and toxins no matter what you do, but you can fight back by ridding your body of toxins with Natural Cleanse.