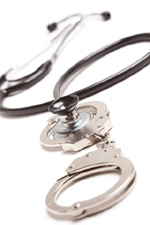 My patient, I’ll call him Jim, worked as a security driver for an armored car company and loved his job.

Jim was only 47 and really didn’t want to undergo the three level low back disc replacement and spinal fusion surgery scheduled in four weeks. But he had tried everything from physical therapy to massage and chiropractic for eight years and was told surgery was his only remaining option.

As a last resort before surgery he found FSM on the internet and came to Portland for treatment. When he arrived at our clinic he rated his pain as varying from a 5/10 to a 7/10 in his lower back and leg down to the knee. He couldn’t sit, lay or stand without pain.

Although Jim’s discs were slightly degenerated we determined they weren’t the real cause of his pain. We started a course of treatment consisting of Frequency Specific Microcurrent (FSM) treatment directed at the posterior bony joints in his spine, called facet joints, and at trigger points in his muscles that were referring pain to his lower back. We also used supine manipulation on a table specific for facet joint mobilization.

We started treating Jim five days a week for two weeks. At the end of each visit Jim was pain free, and each time he arrived for his next visit his pain was less than the day before.

At the end of the second week Jim was sent home to continue his progress with a home exercise program for core strengthening and spinal stabilization and an FSM HomeCare unit to treat himself at home as needed.

While Jim’s success at avoiding back surgery is exciting, it’s hardly unique. His case is just one of thousands produced in hundreds of offices around the world every year. That’s because FSM combined with an accurate diagnosis and other therapies has been proven to successfully treat chronic intractable pain from many sources.

In the early 20th century, hundreds of doctors were using frequency machines to treat patients in their practices. Largely due to outside pressure, these machines fell into disuse and for decades were almost completely forgotten. Through a series of fortunate events, I came into possession of a set of these healing frequencies.

In 1946, an osteopathic physician purchased a practice in Canada. A frequency machine developed in 1922 was part of that purchase. Then in 1987, a colleague of mine spent three months working at the same clinic. By that point, the machine was long gone — but a binder including a list of frequencies remained.

Unique frequencies were specified for individual tissues and various conditions such as inflammation, scarring and hardening. A new device called the Precision Microcurrent was developed and approved as standard physical therapy equipment in 1991 and used two independent channels for delivering these frequencies to patients.

We started testing these frequencies on volunteers in 1995. Sometimes a frequency helped, and sometimes it didn’t. Most importantly we discovered that even when positive results weren’t obtained the treatment never caused any harm.

Through continued testing and refinement over the next two years we developed extraordinarily effective treatments for myofascial trigger points using FSM. Around the same time, I started teaching the protocols in seminars to other healthcare practitioners. I wanted to know whether or others using them would have the same success. They did.

Since then we’ve continued to be amazed by the improved pain relief and healing FSM allows once we discover the right treatment frequency and protocol for a condition.

The following year we discovered FSM could treat the full body pain from fibromyalgia associated with spine trauma. This type of pain is constant, never below a 5/10, and doesn’t respond to narcotics.

As a group these fibromyalgia patients are the only ones who complain specifically of pain in their hands and feet. This group of very difficult to treat patients rated their pain as an average of 7.4/10. Through experimentation, we found that one specific frequency combination could reliably reduce the pain to a 1.4/10 in just 90 minutes. Every patient had their pain reduced at every treatment and well over half of them recovered from their fibromyalgia within four months.

When a small group of them had their blood analyzed by a chemist at NIH it was found that the treatment also reduced all of their inflammatory blood markers by 10 to 20 times in 90 minutes and increased endorphins (the “feel good” neurotransmitter) by 10 times. These markers are said to be difficult to change. In fact, these kinds of improvements have never been seen before or since with any other therapy.

Other standard FSM protocols have been developed for disc injuries and pain, low back pain from facet joints, shoulder and knee pain, arthritis, headaches, and peripheral neuropathies.

Some frequencies serve only a very specific purpose. There is one frequency combination that completely eliminates shingles pain and infections with a two hour treatment. Another frequency combination eliminates kidney stone pain in 20 to 60 minutes. It doesn’t change the stone, just the pain. Both frequencies have only their single effect, yet so far they have been effective in every case.

FSM is especially good at reducing inflammation and dissolving scar tissue. If FSM is used on new injuries within four to twelve hours of the injury it promotes very rapid healing. Today numerous NFL teams and players use FSM as a vital healing tool to get injured players back on the field more quickly. After a December 2004 surgery, Philadelphia Eagle receiver Terrell Owens returned to play a strong Super Bowl game just weeks later even though he was expected to spend three or more months in recovery thanks in part to FSM.

How to Get Started

FSM is an entirely new approach to healing. It uses the principles of bio physics to change tissue and eliminate the cause of the pain. It doesn’t just cover up symptoms. It appears to change the tissue quickly and in some cases permanently by altering the electromagnetic bonds that keep scarring and inflammation in place in the tissue. No one knows for certain exactly how the effects are created but there is good science that says something very real and very dramatic happens in response to specific frequency combinations.

There’s a saying among FSM practitioners, “It can’t hurt; it might help.” This new paradigm in healing creates new hope for pain patients.

To find an FSM practitioner near you, visit: www.frequencyspecific.com/practitioners