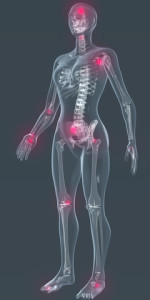 Fibromyalgia syndrome is a chronic disorder that causes widespread pain, tenderness and sometimes additional symptoms like fatigue, sleep problems and brain fog. The pain of fibromyalgia is often described as a dull unrelenting ache that occurs on both sides of your body.

It’s estimated that 5 million Americans, mostly women, struggle with this condition,[i] which, until recently, wasn’t even recognized by doctors. The problem is that while the characteristics of fibromyalgia are becoming more widely understood, the causes – and effective treatments – are not.

Fibromyalgia tends to run in families, so there’s thought to be a genetic component. It also sometimes appears after an infection or physical or emotional trauma, although other times there is no apparent trigger.

Fibromyalgia is more likely to occur if you have another rheumatic disease, such as rheumatoid arthritis or lupus, and it may also occur alongside other pain conditions, such as chronic fatigue syndrome, endometriosis, inflammatory bowel disease, interstitial cystitis, temporomandibular joint dysfunction, and vulvodynia.[ii]

At the foundational level, it’s thought that fibromyalgia may affect the way your brain processes pain signals, leading to constant pain. The Mayo Clinic explained:[iii]

“Researchers believe repeated nerve stimulation causes the brains of people with fibromyalgia to change. This change involves an abnormal increase in levels of certain chemicals in the brain that signal pain (neurotransmitters). In addition, the brain’s pain receptors seem to develop a sort of memory of the pain and become more sensitive, meaning they can overreact to pain signals.”

Their purpose is to relieve the symptoms of pain, depression, sleeplessness and muscle tension that characterize this condition, yet they do so only on a superficial level, and many who take pain relievers still find no relief from their pain.

In one analysis of 10 high-quality studies comprising more than 6,000 adults who received either duloxetine (Cymbalta, and antidepressant), milnacipran (Savella, for fibromyalgia pain), or a placebo to treat fibromyalgia for up to six months, the majority of those taking medications did not experience substantial improvement.[iv]

Only 22 percent of those on the drug regiment improved significantly while 21 percent quit taking the medications because the side effects were too severe. The most common medication side effects that lead patients to stop taking the drugs were nausea, dry mouth, constipation, headache, somnolence/dizziness and insomnia, and, rarely, both drugs were associated with suicidality, liver damage, abnormal bleeding, elevated blood pressure and urinary hesitation.

The researchers concluded that drug treatment alone for fibromyalgia “should be discouraged,” and instead suggested a more holistic approach that included exercise to improve mobility and psychological counseling to improve coping skills.

Fred Wolfe, M.D. of the National Data Bank for Rheumatic Diseases told the Center for Advancing Health:[v] “This is a very important study … There’s an enormous amount of advertising suggesting that these drugs really help, whereas the research data show that the improvement is really minimal.”

“The medical field does poorly with the treatment of fibromyalgia in general … Chasing [a cure] with medicine doesn’t seem to work.The people who seem to me to do best sort of figure it out on their own by thinking about things, getting to know themselves, and making changes in their lives to accommodate who they’ve become.”

The word fibromyalgia comes from the Latin term “fibro,” for fibrous tissue, and the Greek words “myo” (muscle) and “algia” (pain), [vi] and this gives a great clue to one of the most preferred, safe and natural treatments for this condition. According to Dr. William Wong, ND, PhD.:[vii]

“ … in FMS [fibromyalgia syndrome] we have a build up of fibrin (the fibro of Fibromyalgia) through and across striated muscle around the body. There is also the growth of fibrin in the micro-circulation essentially plugging these tiny blood vessels in the effected areas. The combo of decreased blood supply, with the strangulating effect of the fibrin on muscle tissue … creates the environment of ischemia [(the lack of oxygen or Adenosine Tri Phosphate for the cells to breathe, leading to pain)].

What can be done to decrease the fibrosis? Until recently, nothing. There has been really nothing in either the allopathic or naturopathic armamentum that was capable of lysing away scar tissue or fibrosis … [but] with the advent of oral systemic enzyme research and application all branches of the healing arts now have a powerful and effective tool for the safe lysing away of fibrosis.”

In short, the pain and suffering of fibromyalgia have been linked to an excess of fibrin in your muscle tissues. Known as fibrosis, this condition can spread to affect every muscle and organ in your body. Fortunately, it doesn’t take long to reverse fibrin overgrowth. The key is re-activating your body’s natural fibrin clean-up crew, which is made of proteolytic enzymes, a group of systemic enzymes responsible for breaking down protein molecules. They hit fibrin masses and eat them away — literally! As an added bonus, proteolytic enzymes also cleanse toxins from your blood, fight viruses, and fortify your immune system.

To learn more, and discover the most powerful proteolytic enzyme supplement on the market, click the box below. Sound too good to be true? More than 150,000 people in 85 countries have already become pain free using all-natural proteolytic enzyme therapy. Care to join them?

14 thoughts on “Enzymes for Fibromyalgia? The Natural Treatment That Could Stop Your Pain”