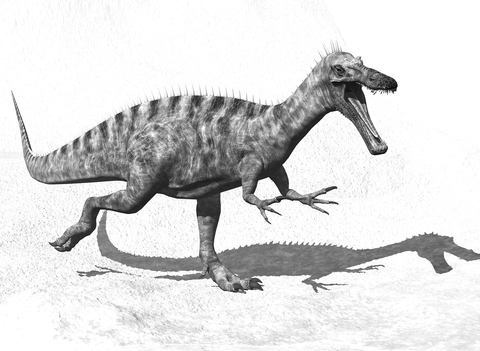 Researchers from the Berlin Natural History Museum have uncovered bad backs in dinosaurs.

The finding is the first of its kind and reveals the back pain was caused by spondyloarthritis, a type of arthritis that causes bone to grow between joints, leading to severe pain and curvature of the spine in humans.[i]

The dinosaur with the backache was a phytosaur, also known as a ‘crocodile dinosaur,’ and researchers found clear signs of the inflammatory vertebral condition in its 220-million-year-old backbone.[ii] The researchers said:

In case you were wondering, phytosaurs grew up to 40 feet long and they were semi-aquatic; they lived mostly in the water but could also walk on land. Phytosaurs were thought to be very similar to modern-day crocodiles, although, according to Palaeos.com:

“Fossil footprints indicate … that phytosaurs could move in a semi-erect stance on land and did not drag their tails as modern crocodiles do.”

Can you imagine a 40-foot crocodile walking (upright) your way? Their backs certainly had one heavy load to carry … but, still, who would’ve thought dinosaurs had back pain from chronic inflammation too?!

That would have been one heck of a backache (and one dinosaur I’d never want to meet!). Back then the dinosaur had no choice but to suffer through it (which may have been for a long time, since the scientists suspect the phytosaur “acquired this disease in its early life.”).

Dinosaurs Suffered Back Pain, But You Don’t Have To

Whether you consider yourself a dinosaur or not, you DO NOT have to suffer with a bad back like they did …

After 7 years of research and development, we have uncovered 12 of the most potent and natural pain relievers in the world — and we’ve combined them all into one all-natural formula … Heal-n-Soothe.

One of the (many) factors that makes Heal-n-Soothe unique is that it provides your body with proteolytic enzymes, which are the #1 way to end the chronic inflammation that underlies back (and other) pain — and apparently has been causing pain to all kinds of creatures for millions of years!

It’s too bad Heal-n-Soothe was not around for the dinosaurs (would have been a mighty big dose), but it’s time for this pain cycle to end. Best of all, Heal-n-Soothe is available at a special introductory price for you today … click here before it goes extinct (pun intended … I couldn’t resist).