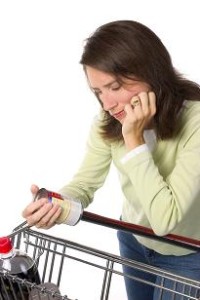 You know those rows of candy, chips, chewing gum and mints, and little fridges full of soda and energy drinks, that line the grocery store checkout lanes? These grab-and-go items make up just 1 percent of a typical supermarket’s merchandise … but account for 4 percent of its profit.[i]

Let’s face it … most people don’t list candy bars and potato chips as must-haves on their grocery list … but these items probably end up in your shopping cart more often than you’d care to admit.

Impulse buys are so important to supermarkets and food manufacturers that companies such as Hershey’s have seen slowing sales as more customers opt for online shopping, curbside pickup and self-checkout.[ii]

These avenues allow you to bypass the rows of snacks at checkout, so candy makers are considering self-dispensing candy machines at the curb or near gas station pumps, or pop-up menus before you complete your online purchase, to encourage customers to keeping up their impulse buys.

As noted in the book America’s Cheapest Family, it’s not only the checkout lane that prompts impulse purchases. Temptations lurk all around, and the more you go to the store, the more you’re likely to bring home. According to the book:[iii]

Fortunately, there are tricks you can use to stay within your food budget and not sabotage your diet with unhealthy impulse buys. The next time you go grocery shopping, try the suggestions below.

1. Eat an Apple Before You Go

People who ate an apple snack before going grocery shopping bought 25 percent more fruits and vegetables than people who did not.[iv][v] The researchers concluded, “ … samples can serve as primes and encourage purchase of a greater number of products that are similar to the sample on dimensions such as healthiness.”

The same study mentioned above also found people who ate a cookie before shopping purchased a greater amount of less healthy items than those who ate an apple. So sampling junk foods while in you’re grocery shopping could trigger you to purchase more of them.

3. Go Grocery Shopping Just Once or Twice a Month

The more times you enter a grocery store, the more chances you have to fill your cart with junk food. Instead of shopping a few times a week, plan your meals in advance, make a long list and head to the store just once or twice a month. If you need to supplement fresh produce during that time, try to pick it up at your local farmer’s market.

4. Shop When You’re Short on Time

An alternative to shopping just a couple of times a month is to head to the store when you only have a set amount of time, such as on your way home from work, just before you need to start dinner. When you know you have somewhere else to be, you’ll focus on what you need most and get in and out quickly.

Bringing only a certain amount of cash with you to the store will force you to stay within your food budget. You won’t be able to buy too many impulse items because that will leave you short for your staple goods.

6. Use a Small Shopping Cart

Surprisingly, they reasoned this was because holding a basket leads you to flex your arm muscles, which influences your purchases and makes consumers more likely to look for items that offer instant gratification.[vii] The best choice may therefore be to choose a small shopping cart (unless you’re shopping in monthly increments, in which case you’ll need a larger option).

You’ve got a playlist for the car, the gym and relaxation time, why not for the grocery store? Be sure to choose upbeat songs, as research shows when you listen to a typical store’s slow music, it causes you to linger there and spend nearly 30 percent more.[viii]

Up Next … 3 Very Popular Painkillers You Should NEVER Use