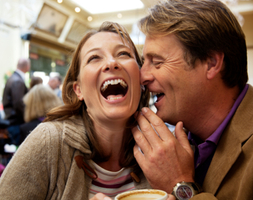 At the beginning of my shift, I placed a stethoscope on an elderly and slightly deaf female patient’s anterior chest wall. “Big breaths,” I instructed. “Yes, they used to be.”

Bet you couldn’t help but laugh, even a little… Or could you?

If a smile or chuckle was your first response, the chances are good your health is a bit better than you believe it to be, even if you’re staring down the barrel of serious problems like chronic back pain.

What started with Dr. Norman Cousins’ very famous article on laughter therapy in the New England Journal of Medicine (leading to his landmark book Anatomy of An Illness) has evolved over the past four decades toward a more balanced mind-body philosophy supported across the world of medicine.

Don’t Be So Skeptical!

It’s very easy to be cynical about the value of laughter and positive emotions with respect to your good health. Yes, it’s true people can’t will their bodies into tip-top wellness with happy thoughts and bad jokes. It takes great effort and persistence to make a difference for the better in your health.

That said, a sense of humor and the ability to laugh are recognized as valuable, beneficial and very essential traits in maintaining one’s good health. And, the evidence gathered very recently in three studies is piling up to prove it.

For example, your body may react favorably or negatively, depending on whether you’re watching an intense war drama — Saving Private Ryan — or an intense comedy — There’s Something About Mary — at the vascular level.

No surprise, patients reacted very differently while watching the comedy. The lining of their blood vessels expanded in such positive ways that scientists compared the body’s reaction after laughing to a benefit similar to doing aerobic exercise or taking a statin drug.

Differences in the blood were very noticeable in a study that measured levels of the hunger hormones leptin and ghrelin in patients after watching humorous and serious 20-minute video clips. Watching serious segments didn’t affect hormone levels of participants one bit.

The same can’t be said, however, for reactions to comedic clips. Scientists reported variances in blood pressure along with drops in leptin and increases in ghrelin, again very common with the acute effect of moderate physical exercise and increased appetites.

An interesting and humorous aside surfaced during a five-year review of British nursing home patients suffering from venous leg ulcers being treated with expensive ultrasound therapy.

Although ultrasound therapy was expected to make a huge difference in the recovery time of nursing home patients, it did nothing to speed up the healing process. In fact, researchers concluded stimulating the blood flow upward from the legs to the heart was much more effective, researchers concluded, by using compression bandages and support stockings and encouraging patients to laugh.

5 Ways To Bring On The Funny Naturally

Of course, not all of us are naturally funny (though most would like to believe otherwise). That said, you can incorporate laughter and humor into your daily routine pretty easily and naturally by following these suggestions from Helpguide.org (connected with Harvard Health Publications):

After receiving his medication from the pharmacist, the customer asks, “Are these time-release pills?” The pharmacist replies, “Yes. They begin to work after your check clears…”

The Network for Women in Ministry