Could you have a herniated disc in your neck — and not know it? 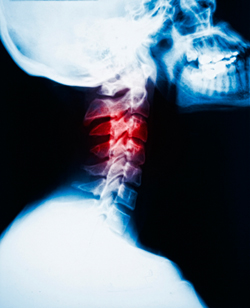 Do you have a ticking time bomb inside your neck?

Believe it or not — 3 out of every 5 adults have herniated discs, even if they don’t feel any pain!

That’s because the disc has to actually hit a nerve before it starts to hurt.

In other words, you have a greater than 50% chance of having a herniated disc in your back or neck, hidden and waiting to turn into a full-fledged problem.

It’s like a ticking time bomb. As little as 1 mm of movement can make the difference between no pain and excruciating agony.

Even though your neck feels fine today — you’ll want to make sure you’re doing what you can to prevent the sudden crippling pain of a pinched nerve from a herniated disc.

Why Do Discs Herniate?

Your spinal vertebrae, including those inside your neck, are separated by spinal discs. These discs are made up of outer cartilage with a jelly-like substance in the middle, and consist mainly of water. They function as shock absorbers for your spine, allowing it to move freely and flexibly.

Over time, your discs gradually shrink, become less flexible, and lose their shock-absorbing capacity. Aging, gravity, a sedentary lifestyle of constant sitting, poor posture, and improper lifting all contribute to this decline. As a result, the spaces between your vertebrae become narrower and your spine as a whole gradually becomes less flexible.

Still, spinal discs are surprisingly resilient. They’re meant to hold up under pressure and can take a lot of abuse before failing.

However, your spinal discs are meant to support pressure fairly evenly across the disc. It’s the uneven compression and torsion caused by muscle imbalances which often leads to a bulging or herniated disc.

If you’ve never heard of muscle imbalances before — you’re not alone! Most conventional medical doctors are never taught the basic human anatomical and biomechanical approaches for identifying muscle imbalances. Instead, they’re bombarded with training and messages about how to cut and medicate away pain.

That’s why you often won’t find lasting relief from neck pain at traditional doctor offices — they’ve never been taught how to treat the underlying problem of muscle imbalances.

Muscle imbalances can occur for any number of reasons: playing golf, improper exercise, even just sitting in a chair all day.

This uneven pressure displaces your spine from its normal position. Your body is then forced to work in an abnormal state called a physical dysfunction. Over time, several such dysfunctions can build up in your back and neck.

These physical dysfunctions can force your discs past the “breaking point” and lead to pain.

That’s why the first step towards healing is to correctly identify which dysfunctions you have and the muscle imbalances which led to them.

How Do You Heal Herniated Discs?

Doctors like to cut away bone and disc material to relieve pressure that’s causing nerve pain, but that’s rarely necessary. In fact, it’s just another way of treating the symptom rather than the cause.

A disc herniates when too much pressure is placed on one side of the disc.

If you squeeze one side of a jelly donut where’s the jelly going to go? Out the opposite side, right?

Same thing with the material inside your spinal discs. Too much pressure on one side causes the opposite side to bulge. Continue the pressure and the inner material can herniate, or break through, the wall of your disc.

It just makes sense that before your herniated disc can heal, you have to remove the pressure.

That’s why spinal decompression is so successful at treating herniated discs. By relieving pressure on the disc, it can often ease back into its normal position, reabsorb lost fluids, and properly cushion your spine again.

Most important of all — returning a herniated disc to its normal position moves it away from your nerves, leading to a sudden, almost miraculous relief from neck pain!

Now I know what you’re thinking. Even with insurance, paying for a chiropractor, physical therapist, or a series of treatments in a decompression machine can very quickly turn into a serious drain on your pocket…

…which is why I like to recommend another option called an inversion table.

With an inversion table you get the whole benefit of safe spinal decompression, in the convenience of your own home for pennies on the dollar you might spend otherwise.

Inversion tables put gravity to work for you, instead of against you. As you invert, your own body weight gently stretches your spine, increases the space between your vertebrae, and relaxes pressure on your discs, ligaments and nerve roots. 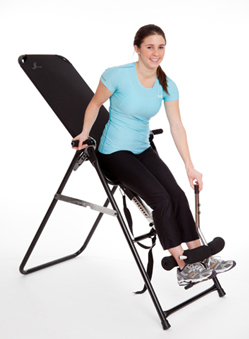 Along with relieving your neck and back problems, inversion tables improve your flexibility and mobility, literally leaving you feeling young again! They also correct your posture and keep your body properly aligned, improving your appearance and general feeling of well-being.

Here’s how inversion therapy can help you:

Thousands of people have written to say how inversion therapy has benefited them and made their lives easier and pain-free. They can finally enjoy an active lifestyle again and even sleep through the night.

While inversion tables are great for decompressing your neck and back, it’s only the first step in a full recovery from a herniated disc. Remember, your disc likely herniated in the first place due to postural dysfunctions caused by various muscle imbalances.

It’s also important to remember that most neck pain has nothing to do with a herniated disc in the first place. And while an inversion table can help in those circumstances too, a comprehensive approach to identifying and eliminating muscle imbalances specifically associated with your neck is needed to give you the long-lasting pain relief you’re looking for.

That’s why we offer the Lose the Neck Pain™ program. It’s the first program in the world to offer a customized, at-home neck pain solution based on the same principles of eliminating muscle imbalances.

So if you have neck pain, or even a persistent stiff neck, I urge you to give this program a try. It can change your life.