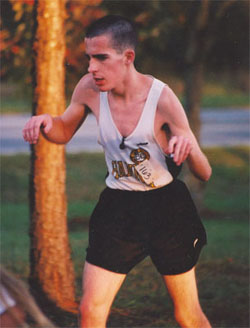 The diagnosis left his own parents wondering if Ben Comen would ever even walk. But walk he did. And then some.

But Ben’s dream was to be on a team. Any team.

Team after team refused to let him actively participate, yet Ben’s family refused to give up. All he needed was a chance.

Just before leaving 7th grade, Ben discovered that 8th graders were eligible to run in the high school cross country team. His mother called the coach, Chuck Parker, who said “No problem, bring him on” and the rest is history.

Ben ran for five years on his cross country team. The physical challenges of cerebral palsy didn’t allow him to run as fast as his teammates, and the going sometimes became lonely… but Ben chose to keep pushing forward anyhow.

Ben discovered that his biggest competition was himself. And he won.

The Truth About What Really Causes Back Pain

2 thoughts on “The Boy Who Wouldn’t Quit”