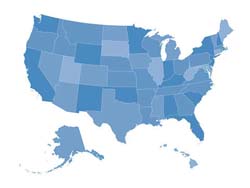 Where does your state rank for back pain?

Two years ago I wrote a book, The 7-Day Back Pain Cure.

When the book was almost ready for publication, I decided to offer a little contest to give away 10 copies.

Literally hundreds of people from all over the country and around the world wrote to tell me why they needed help with their back pain.

Not able to pick from all the entrants who “deserved” to get rid of their back pain… they all did… I decided instead to give away the entire first print run of 1,000 books to the first 1,000 people who asked for a copy.

I figured they would all go. But not nearly as fast as they did. The entire first print run was snapped up in less than 12 hours!

So I decided to go ahead and order several thousand more copies from the publisher and give those away too. Gone in days.

What started as a small idea to give away a few books to generate some interest in my first book became a significant portion of the Healthy Back Institute’s mission “to completely transform the way back pain is treated so people can reduce or eliminate their pain and enjoy more of their lives.”

Which State Has the Most Back Pain?

First, we took all the requests for books we received and broke them down by the state we shipped them to. Predictably, states like California, Texas, New York and Florida with the largest populations also had the most book requests.

But that didn’t answer what we were really curious about. What we wanted to know was which states have the most back pain and least back pain based on a percent of the population? Are the most populous states really the worst states for back pain? Or was there some other pattern?

So we crunched a few more numbers and compared the number of book requests with last year’s Census figures to order the states from most back pain to least back pain as a percent of their population.

The results turned out to be quite interesting.

Washington, DC, which actually boasts more population (601,723) than the entire state of Wyoming, shows up near the middle of the list.

What Do You Think?

Tell us what you think in the comments below. And if you have back pain, let us know what kind of pain you have and what state you’re from. And of course, if you haven’t already, be sure to ask for a free copy of my book for yourself.

29 thoughts on “The Best and Worst States for Back Pain”