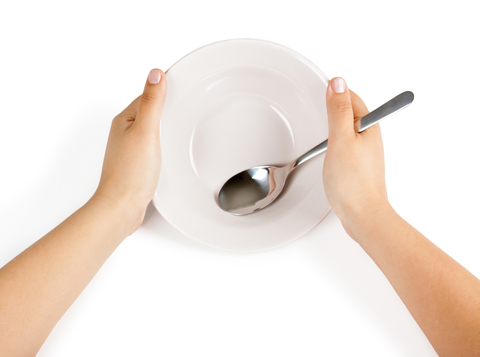 When’s the last time you woke up late for work and rushed out the door with your cup of coffee in hand — but no breakfast to speak of? Or how about got so busy that lunchtime came … and went … before you had a chance to grab a bite to eat?

It’s incredibly common; an estimated 31 million Americans skip breakfast every day,[i] while another 31 percent of North American workers occasionally, rarely or never take a lunch break.[ii] Whether this is a trend you should eliminate or embrace is up for debate, as there are actually arguments for both … skipping meals can, in some ways, be beneficial, but then there are serious risks you should consider as well.

Mice that did all of their daily eating during an 8-hour window, and fasted for the rest of the time (including while they slept) stayed lean while mice who ate around the clock became obese — even though they ate the same high-fat, high-calorie food.[iii] The metabolic break the body got during the 16-hour fasting period (the equivalent of wrapping up your dinner by 5 pm, then eating breakfast at 9 am the next morning) appeared to be protective against obesity.

The mice in the above-mentioned study were not only lean, they were also very healthy, showing few markers of inflammation, while maintaining healthy cholesterol and blood sugar levels (and displaying wonderful endurance). In humans, skipping meals two days a week so that your calories total just 500 for women, or 600 for men, has also been shown to lead to cardiovascular benefits, weight loss and improvements in blood sugar and cholesterol.[v]

Skipping meals for two days a week so that your total caloric intake totals 500-800 calories a day has been linked to lower levels of growth factor, a hormone linked to cancer and diabetes, LDL (bad) cholesterol, triglycerides and inflammation, while triggering protective processes in your brain that may help fight Alzheimer’s, Parkinson’s and other degenerative diseases.[vi]

Human growth hormone, or HGH, which helps keep your metabolism (and weight!) in check and protects your muscles from shrinking as you age, increased an average of 1,300 percent in women, and nearly 2,000 percent in men, during a 24-hour period of skipping meals and drinking only water.[vii]

And Now for the Risks …

When you skip meals during the day, there’s a good chance you’ll get hungry … so hungry that you may binge on a large evening meal full of not-so-good—for-you foods. When this happens, potentially risky metabolic changes, such as elevated fasting glucose levels and delayed insulin response, may occur, and such changes may increase your risk of diabetes over time.[viii]

Your brain typically depends on glucose for fuel, but when you skip meals, the lack of food can lead to glucose deprivation in your brain. This can lead to trouble concentrating, confusion, weakness, dizziness, anxiety and other symptoms of both physical and mental impairment.

Some people are able to skip meals without noticing a difference. But for others, their stomach growls and they experience noticeable hunger pains. This sensation is not only uncomfortable, it can also be very distracting, keeping you from being productive and motivated at work, home or school. Not to mention, hunger makes many people irritable, cranky and simply unpleasant to be around …

Food deprivation is thought to lower your tolerance for pain, which means if you’re hungry you may feel more pain than someone who is full. In one study, people who hadn’t eaten in two days reported a significantly higher amount of pain than those who ate regularly.[ix] The hunger-pain connection is thought to be related to the “hunger” hormone ghrelin, which may influence pain thresholds.

If you are “enzyme bankrupt,” your pain may be skyrocketed to an even higher level, as proteolytic enzymes in your body are the first line of defense against pain and inflammation! But, as you age your enzyme levels naturally decrease, such that a newborn baby’s enzyme levels are 100 TIMES HIGHER than that of an elderly person, while a 20-year-old has double the enzyme levels of a 70-year-old …

So if you find that you’re always skipping breakfast, or even if you’re not, if you’re in pain it’s essential that you address your body’s crucial need for enyzmes. Heal-n-Soothe is the most powerful, all-natural proteolytic enzyme formulation available, with the incredible systemic enzymes Protease AM, Protease 6.0 and Alkaline Protease … Bromelain and Papain to give you the most powerful pain-fighting effects.

This pain-reducing miracle is made for the pain sufferer who wants to get rid of their pain without adding mystery chemicals into their body, and wants to get on with their life, pain-free.