Why Women Experience More Neck Pain & What To Do 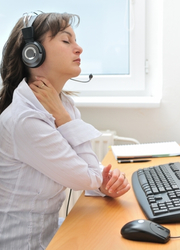 A Swedish medical study finally confirmed something some had already suspected: neck pain in women is far more prevalent — regardless of age or profession — than in men.

The big surprise about the discovery: scientists assumed the physical demands of some jobs would make men more prone to neck pain, or at least even things out, but not so fast…

Two questionnaires polling some 1,500 women and 1,400 men — many of whom were younger, hadn’t started families, or were studying much of the time — confirmed the results.

What makes neck pain harder for women is a common problem that worsens many diseases and physical challenges: perceived and largely untreated stress due to various psychosocial factors, including the demands of work and studying.

And spending too many hours in front of a computer sitting in bad chairs versus the best chairs for preventing pain doesn’t help either.

Yes, There IS A Solution with a 93% Success Rate!

Thankfully, neck pain can be easily and gently treated without resorting to expensive doctors, dangerous drugs or surgeries…

It is called the Lose the Neck Pain System, and it was developed by Dr. Paris, a renowned neck pain specialist.

This system has helped thousands of others overcome neck pain for good, but it is something most doctors don’t want you to know about!

Discover why, and then try this simple and powerful system with a 93% success rate …

2 thoughts on “Neck Pain in Women”