In a matter of months, American voters will be heading to the polls to choose a candidate to represent them in next year’s Presidential election.

But if certain members of the media have their way, the field of Presidential hopefuls will be limited strictly to their own hand-selected “top tier candidates.”

In other words, news reporters aren’t so neutral after all. Some have a “liberal spin” and others have a “conservative spin”… but candidates who don’t fit either mold… well… they simply disappear from coverage.

If you think that’s just a bunch of conspiracy theory malarkey, then you’ve really got to see the video below. The first time I saw it I was both shocked and laughing hysterically at the same time.

I mean, we often hear about how the media is biased. But to catch them blatantly in the very act? That’s the humorous result of a recent segment by Comedy Central’s Jon Stewart:


Yes, I get it that some people believe politics and business don’t mix. I’ve been criticized before just for having a Ron Paul sign hanging from my desk in the background of a video.

Now that video wasn’t intentionally a political statement. I just happened to shoot an office stretch video in my personal office where the sign was hanging, prompting some readers to tell me in the comments that I “offended” them.

I support Ron Paul for President of the United States.

Why does this statement belong on a blog about natural ways to heal your back pain? Because personal liberty is inextricably linked with the ability to make personal choices about your healthcare and every other aspect of your life.

And because I know no other candidate matches Congressman Paul’s strong history of championing personal liberty and consistent voting record to match his Constitutionally-limited view of government as our country’s founders intended.

You may disagree. That’s your right. But before you settle on a candidate, let me ask you this…

Are you letting the media pick your next President for you? Are you digging a little deeper to discover what these media-selected candidates really stand for? And whose pocket they’re in?

Or are you just blindly following the talking heads on TV? 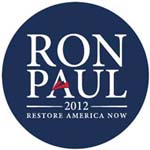