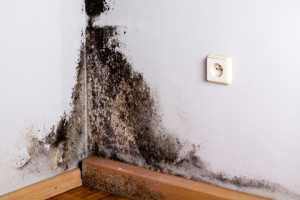 Black mold syndrome? If you’re experiencing unexplained health symptoms it’s important to look to your environment for potential causes, including the presence of toxic black mold.

To be clear, black mold (or Stachybotrys chartarum) isn’t inherently toxic, but it can produce mycotoxins (and other biologically active metabolites), which are.

The first cases of mycotoxin poisoning caused by black mold (known as stachybotryotoxicosis) occurred in horses that had eaten contaminated feed or encountered it in their bedding. This was during the 1920s in Russia, and reports continued in other countries over the next several decades.

While the ability for toxic mold metabolites to cause illness via inhalation remains controversial, there are plentiful anecdotal reports of people who have become ill after mold exposures. As reported by The American Phytopathological Society (APS):[i]

“Numerous studies have demonstrated the toxicity of toxins from S. chartarum on animals and animal and human cells … In addition, the fungus produces nine phenylspirodrimanes (spirolactones and spirolactams) and cyclosporin, which are potent immunosuppressive agents.

Jarvis et al. suggested that the combination of trichothecenes [a type of mycotoxin] and these immunosuppressive agents may be responsible for the observed high toxicity of this fungus.”

One of the most concerning toxic links was reported in the early 1990s when an outbreak of pulmonary hemorrhage occurred in infants living in Cleveland, Ohio. S. chartarum was found in the homes of the sick infants, and although a conclusive link has not been found, the potential association made the once-unknown black mold a household name.

Black mold has further been implicated in illness caused by “sick building syndrome,” which admittedly likely has multiple toxic exposures at its root. However, as mentioned, if you are experiencing unexplained health symptoms, it’s important to determine if mycotoxins from mold could be to blame.

What Are the Symptoms of Mold-Related Illness?

The symptoms can be incredibly varied and are dependent upon the type of mycotoxins and other metabolites produced as well as an individual’s sensitivity. Not everyone is affected by mold, and there is some evidence that those who are may have a mold allergy.

For instance, research published in the Annals of Allergy, Asthma and Immunology revealed that mold-exposed patients can experience a variety of IgE- and non-IgE-mediated symptoms. In other words, some symptoms may be caused by an immune-system mounted allergic response while others are not. They noted:[ii]

“Mycotoxins, irritation by spores, or metabolites may be culprits in non-IgE presentations … Allergic, rather than toxic, responses seemed to be the major cause of symptoms in the studied group.”

So what, exactly, are the symptoms? Some of the most common include:

Less commonly, black mold syndrome may also lead to symptoms such as panic attacks, nose bleeds, ringing in your ears, anxiety, vision problems, muscle twitching, mood swings, anxiety and much more. As I said, the symptoms can be incredibly varied. APS reported one case study that occurred in 1986, which shows how poisoning via black mold mycotoxins may present itself:[iii][iv]

The fungus was found growing on moist organic debris in an uninsulated cold air duct and on some wood fiber ceiling material. The home had a chronic moisture problem that favored mold growth.

Extracts from the duct debris and contaminated building materials were toxic to test animals and several macrocyclic trichothecenes were identified in the extracts. When the mold problem was corrected, these symptoms associated with trichothecene toxicosis disappeared.”

Moisture Is Necessary for Mold Growth

It should be noted that constant moisture is required for mold growth. Areas with water damage, excessive humidity, water leaks, condensation, water infiltration or flooding are prime “hot spots” for mold, but keep in mind that you won’t always see these spots.

If the mold infestation is severe, you will be able to see it or smell it. However, mold growth can occur in areas of your home where you don’t realize there’s a problem, such as a basement or even behind drywall.

If you have a mold problem, the first step is to stop the source of the moisture so the area can dry out. Next you’ll need to remove any contaminated items (including carpeting, insulation or wallboard). While it’s possible to clean hard surfaces to remove mold that’s on the surface, APS notes:

In severe cases, you may need to contact a professional mold remediation company. Removing the mold is the first step in your recovery process.

Herbal remedies can be useful for recovering from black mold syndrome. You’ll likely need a combination of herbs to address the mold toxicity from multiple angles; a natural health care provider can help you develop an individualized natural treatment plan that includes:[v]

If you’re sensitive to mold, also be sure to remove foods from your diet that might be contaminated with mold. This commonly includes corn, sugar, peanuts, wheat, alcoholic beverages and certain cheeses.

Suspect Mold Poisoning?
The Natural Remedy You MUST Try Now…

Finally, if you have symptoms related to black mold syndrome, a high-quality, systemic proteolytic enzyme supplement like Heal-n-Soothe® is a MUST. Proteolytic enzymes are, literally, protein-digesting enzymes.

All living things, including mold and viruses, have a protein on their outer shell, and that protein can be viewed by proteolytic enzymes as not belonging to your body — and thus the enzymes will attack it. As noted by nutraceutical researcher Jon Barron, director of Baseline of Health Foundation:

“Bacteria, viruses, molds, and fungi are protein/amino acid based. Proteolytic enzymes taken between meals literally go into the bloodstream and digest these invaders.”

In your body, systemic enzymes are known for stimulating your immune system, which is also crucial for fighting black mold syndrome. It’s important to include raw foods in your diet to help replenish some of your body’s enzyme stores naturally, however for fighting black mold syndrome you’re going to want Heal-n-Soothe®, the best systemic enzyme formula to replenish your body’s supply of vital enzymes (with double the enzymes of our previous formula).

Remember that systemic enzymes must be consumed on an empty stomach. If you take them with food, your body may use them for digestion before they have a chance to enter your bloodstream where the real “magic” happens.