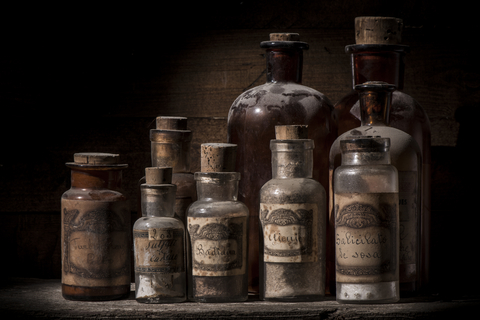 When you visit your doctor you expect to be getting the best advice and treatments that modern medicine has to offer. But the term ‘modern medicine’ is all relative — and doesn’t necessarily equate to the ‘best’ care.

For instance, morphine, opium, arsenic and mercury are all examples of what were once ‘modern-day’ cures. Decades later, hindsight is 20/20, as they say, since we now know the toxicity of such compounds. It would be naÃ¯ve to believe, however, that there aren’t some well-accepted medical dogmas being regarded as the best standard of care right now, in 2013, that will one day be seen as equally as insane as soothing teething babies with morphine syrup …

Toward that end, we’ve compiled some of the most insane, outdated medical procedures, including some that are still in use today, especially in relation to back pain, pain management and weight loss.

Insane Outdated Medical Procedures From Then and Now

Weight loss surgery such as gastric banding and gastric bypass is on the rise, but did you know that nearly 40 percent (that’s close to half) of weight-loss surgery patients face serious side effects like malnutrition, infection, liver failure or sometimes death? Gastric banding is so hit or miss that one in three patients experience band erosion and close to half must have the bands removed (the surgery has a re-operation rate of 60 percent!).[i]

In order to qualify for weight loss surgery, patients typically have to commit to dietary and lifestyle modifications, and many must lose weight prior to the surgery. If you can lose weight, and make diet and exercise changes, for the surgery, you can do it to lose weight without it … and far more safely, at that.

While weight loss surgery does often work, it carries the extreme risk of death and sometimes permanent injury, so choosing to undergo it is a gamble, not unlike using some of the premier weight-loss solutions of the 19th century (like FatOff Obesity Cream, which claimed to ‘reduce superfluous flesh’ with unknown consequences).[ii]

In ancient times, everything from migraine headaches to seizures were treated with bloodletting, in which varying amounts of blood would be drained from your body to rid it of toxins. Its now believed that many may have died from overzealous bloodletting (including George Washington, who reportedly was drained up 5 to 7 pints in the days leading up to his death).[iii]

Interestingly, there may be some merit to bloodletting after all, as research published in 2012 found that obese people with metabolic syndrome had improved blood pressure and markers of cardiovascular disease after just two sessions of blood donation (likely because it reduced their levels of iron).[iv]

4. Bed Rest for Back Pain

It used to be standard to recommend prolonged bed rest to heal back pain, and many physicians still do recommend it. However, now research shows that continuing on with your daily activities leads to better flexibility while bed rest along may make back pain worse (while also leading to depression, blood clots and decreased muscle tone).[v]

It’s now advised that people with back pain resume normal activities as much as possible, and even engage in exercise to speed recovery.[vi]

3. Aspirin or Ibuprofen for Joint Pain

One of the most common uses for non-steroidal anti-inflammatory drugs (NSAIDs) is for treating osteoarthritis, a leading cause of joint pain (NSAIDs include aspirin, Celebrex, ibuprofen (Advil, Motrin), Aleve and others). But clinical studies show that NSAIDs disrupt cartilage synthesis and actually speed up the destruction of cartilage and joints. In other words, they may actually harm your joints and ultimately make joint pain worse!

You might as well rub on some Hamlin’s Wizard Oil — a popular 1800s-era liniment (that could also be taken internally) that claimed to cure rheumatism and pain (and contained such ingredients as ammonia, chloroform, turpentine and alcohol (up to 70%).[vii]

In the 1800s, you could purchase cocaine drops to take the bite out of a toothache or suck on a cocaine throat lozenge if your throat became scratchy from too much singing or teaching (they were advertised for singers, teachers and orators). Due to its pain-relieving properties, cocaine was also used as anesthetic during surgery.[viii]

Think the idea of using cocaine for pain relief is crazy? Today more than 40 people die every day from overdoses involving FDA-approved pain relievers like Vicodin, Oxycontin and methadone. In fact, overdoses involving prescription painkillers that your doctor will readily prescribe now kill more Americans than heroin and cocaine combined![ix]

This surgery, which eliminates motion between vertebrae in your spine, is recommended using the quite archaic premise that if your painful vertebrae can be stopped from moving, your pain will be relieved.

But as you might suspect, fusing together vertebrae in your spine does not come without consequence, like less flexibility in your spine and foundational changes in the way your spine can move.

Because spinal fusion surgery places additional stress on surrounding vertebrae, it can actually increase spinal degeneration and is associated with increases in disability, painkiller use and an inability to work.

If you have back pain and want a safe strategy that really works, check out The 7-Day Back Pain Cure.

[viii] WebMD A Look Back at Old-Time Medicine