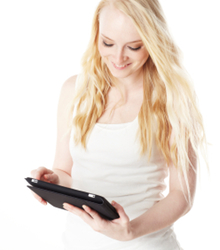 Your iPad, Xoom, or other “tablet” computer may help your productivity or to have fun, but did you know it can also be a serious source of neck pain?

A recent Harvard study found that tablet users may be putting a lot more strain on their neck muscles than those who use a laptop or desktop computer.

Unlike working on a laptop, “The use of media tablet computers is associated with high head and neck flexion postures,” noted Dr. Jack Dennerlein of the Department of Environmental Health at the Harvard School of Public Health … so the concerns were obvious about developing shoulder and neck pain.

For the study, researchers observed a group of  tablet users completing a series of simulated tasks, including reading emails, playing online games, watching movies and browsing the Internet, while using either an iPad 2 or Motorola Zoom. Tablets were equipped with cases that allowed them to be tilted at a variety of low and high angles, so they could sit on tables or a user’s lap.

Even with differences in designs, cases set at the highest, steepest angles — 63 degrees and above — were the “safest” settings, but those were only good for watching movies or reading, not for using the virtual keyboard to input information. Every other position stresses out a user’s neck muscles.

Unfortunately, this study was a mere starting point for dealing with ergonomic issues related to tablet computers, with no sign of standards ever catching up to the great demand for them. Case in point: Apple sold more than 15 MILLION iPads during the last quarter of 2011, and a iPad 3 will be making its way to retail markets some time this Spring. 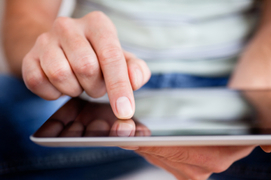 So here are some suggestions for protecting your shoulders and neck starting NOW if you use a tablet:

Treat your tablet and your body as you would while working with any other computer. Desktops, laptops AND tablets weren’t built to be used for long stretches of time. In other words, take breaks to stretch your legs and eyes!

2. Use a Stand or Carrying Case.

This no-brainer comes with an important caveat: Look for and test different cases, stands and covers for their flexibility, so your neck won’t be stuck in one position for extended periods of time.

3. Turn On Your Bluetooth Connection.

If you want to write anything longer than a letter, connect your tablet to a wireless keyboard via a Bluetooth connection.

4. A Tablet Computer is No Laptop.

Understand the limits of your tablet. First and foremost, it is a media consumption device, not a work computer.

If you suffer from neck pain, you’ll want to learn more about the amazing neck pain cure your doctor, chiropractor or physical therapist probably never told you about, with a 93 percent rate of success… 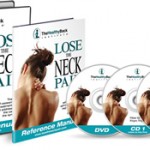 Learn About The “Lose the Neck Pain” System

Work: A Journal of Prevention, Assessment, and Rehabilitation