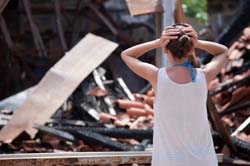 Will you be ready when disaster strikes your family?

Today’s post is going to be quite different. And I’ll warn you right up front it might make you a little uncomfortable.

In fact, I’ll go so far as to say if you’ve believed your whole life that the government will always be there to take care of you…

…and the government always has your best interests at heart…

then you might want to go watch a cute kitten video on YouTube instead of reading on.

Or… you might just want to open your eyes and take some simple steps right now that could literally mean the difference between life and death for your family.

What am I talking about?

I’m talking about the next crisis that will come your way. The one you have an opportunity to prepare for now… or ignore, cross your fingers and “hope for the best.”

Let’s get real here. Hope isn’t a plan. And it won’t help you survive a crisis when it hits.

Because by the time you figure out it’s time to do something… so have all your neighbors who thought no major crisis would ever affect them either.

But the truth is crises happen all the time. Hurricanes. Earthquakes. Terrorist attacks. Major droughts. Monster wildfires. Widespread power outages. Economic crises – whether personal like loss of a job or another major national economic downturn. The list goes on…

What you choose to do today can make all the difference in the “how bad” category for you and your family.

Even basic things like having some spare water and extra food set aside… ensuring your vehicle’s gas tank is always half full or better… keeping some extra “emergency cash” on hand… that sort of thing can leave you better prepared than 90% of your neighbors when the unexpected comes calling.

You certainly don’t have to become the next “Doomsday Prepper” and appear on a TV special in your own personal bunker. (I wouldn’t advise it anyways…)

Thanks to shows like that many in the news have now taken to calling anyone who plans ahead “preppers” or “survivalists” – often in derogatory terms. My parents’ generation would have called the same people “prudent.”

Now you have a choice to make.

You can rely on the government, charity and hope to get you through the next crisis. But first ask someone on Long Island how long it took to get meaningful help after Hurricane Sandy if you’re still in that camp.

Or you can take some simple, prudent steps now to take personal responsibility and control over the impact of unexpected future events.

Admittedly, it can be a daunting task when first getting started. So let me give you some advice. Start by getting your hands on – as soon as possible – the first things that disappear every time a crisis of any scale happens.

It’s usually the food. Because without food you don’t eat.

Every time, without fail, the same food items disappear from the shelves as soon as a whiff of any pending disaster hits the news. Heck, one good snowstorm forecast can clear the shelves in hours!

That’s why the first step in being ready for anything that comes your way is to simply keep those items on hand. Once you do, you’ll never worry again about being the one rushing to the grocery store at the last minute to fight over whatever remains.

Which items are most important? What do you need now?

I’m glad you asked… because that means you want to take personal responsibility for your own well-being. To find out which items are most important, click the link below. Then watch the video on that page in its entirety.

It’s the best first step you can take right now. 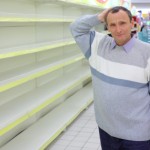