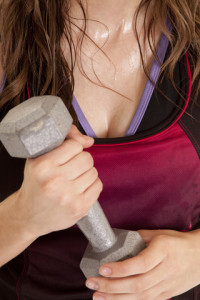 It can be hard to find the time and motivation to fit in regular workouts, but 17 percent of women say they’ve skipped workouts because of a perhaps lesser-known reason — their breasts.[i]

Breasts were actually the fourth greatest barrier to physical activity uncovered by researchers in a study published in the Journal of Physical Activity & Health (after energy/motivation, time constraints and health). Most often, women said trouble finding the right sports bra or embarrassment over excessive breast movement kept them from exercising.

Breast pain increased with vigorous activity and poor breast support, but knowledge of breast health increased the use of a sports bra as well as levels of physical activity.

Despite the fact that half of the women with breast pain described the pain as “discomforting,” 44 percent took no measures to relieve symptoms. Those who did often resorted to pain medication although firm breast support was also reported to be beneficial.

The fact that female breasts are prone to pain during vigorous exercise is not entirely surprising. As reported by the New York Times:[iii]

“It should surprise no one, of course, that exercise influences breasts, just as it does virtually every tissue in the male and female body. Female breast tissue is unusual, however, being weighty, even in small-breasted women, but with little natural anatomical support. As a result, unconstrained breasts move independently when a woman does, and that movement is exacerbated during exercise.”

Previous research even revealed that when women’s breasts are unsupported (i.e. without a bra), they move up to eight inches – up, down, side to side, forward and backward – when a woman runs.[iv] According to Professor Joanna Scurr, who leads the University of Portsmouth’s Research Group in Breast Health (RGBH), said:[v]

“When the breasts are not supported appropriately and there is tension on the ligaments and skin of the breast, it can result in strain and over time this may lead to a stretching of the breasts natural support, which could lead to permanent breast damage.”

One of the simplest remedies for exercise-related breast pain is a properly fitted, highly supportive sports bra. A “high support” bra has been found to reduce breast motion and decrease breast pain in female runners, with researchers recommending a “high support bra that offers good multi-planar breast support” to stop breasts pain when exercising, especially among women with larger breasts.[vi]

For the best results, choose a sports bra designed for your cup size and activity level – and have a professional do the fitting. Scurr explained:[vii]

“You wouldn’t go running without a decent pair of trainers, so don’t exercise without a sports bra to protect your breasts. Regardless of breast size, a well-fitted sports bra can make the world of difference to your workout, as well as your general health and well-being.”

Finally, breast pain can be a sign of underlying inflammation. If you’ve resorted to anti-inflammatory medications to relieve the pain, know that there are other natural solutions, including inflammation-fighting proteolytic enzymes. Heal-n-Soothe® has the most powerful combination of natural anti-inflammatory and pain-relieving ingredients along with the strongest and highest potency of any proteolytic enzyme formulation available.

On their own, each of these ingredients has been proven through both clinical studies and thousands of years of use to be safe and effective. But together, they work synergistically to quickly reduce inflammation and pain. You’ll understand what I mean when you try this amazing blend.