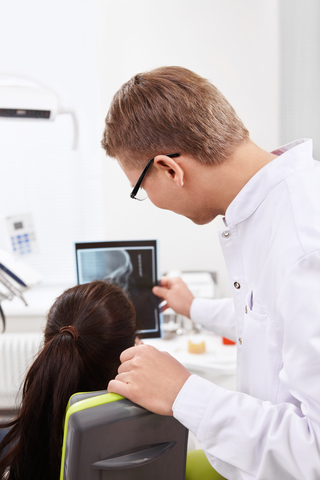 You’ve probably had multiple x-rays taken over the course of your life … at the dentist, that time you sprained your ankle, for a mammogram and probably at least a time or two (or more) in between.

And you probably assumed it was perfectly safe to do so …

Under certain circumstances, x-rays do provide invaluable information that can save a patient’s life. But all too often they’re used as a type of routine screening, particularly in the field of dentistry but also for cancer, and this is where problems may arise.

An x-ray uses electromagnetic radiation known as ionizing radiation to make images, and while the amount you’re exposed to is small (for routine dental x-rays, for instance, you’ll receive about the same amount of radiation as you’d normally get in a day from the sun), radiation exposure is cumulative, which means the doses you receive over the course of your lifetime add up.

It’s also inherently damaging to your body, and according to many experts:[i]

“There is no safe level or threshold of ionizing radiation exposure … Even exposure to background radiation causes some cancers. Additional exposures cause additional risks.”

If you’re considering whether or not to get an x-ray in the near future, you should therefore weigh its benefits very carefully against its risks, as contrary to popular belief, there are quite a few …

Top 4 X-Ray Dangers to Be Aware Of

The cancer risk per unit dose of radiation is higher in children than it is for adults, and because of their age, children have a longer life expectancy during which radiation-induced cancer may develop. Further, oftentimes hospitals and other health care settings use equipment and exposure settings that are designed for adults, making the radiation exposures excessive for children.[ii]

The biggest concern regarding excessive radiation exposure in children is cancer that develops later in life. This is a risk even when each x-ray radiation dose is very low. According to the World Health Organization (WHO):[iii]

“If the dose is low or delivered over a long period of time (low dose rate), there is greater likelihood for damaged cells to successfully repair themselves. However, long-term effects may still occur if the cell damage is repaired but incorporates errors, transforming an irradiated cell that still retains its capacity for cell division. This transformation may lead to cancer after years or even decades have passed.

Effects of this type will not always occur, but their likelihood is proportional to the radiation dose. This risk is higher for children and adolescents, as they are significantly more sensitive to radiation exposure than adults.”

3. Dental X-Rays Every Six Months, and Probably Every Year, May Cause More Harm Than Good

Many dentists recommend x-rays at every 6-month or yearly check-up, but this may be exposing you to x-ray radiation for no good reason. American Dental Association (ADA) guidelines actually call for them far less often, but many dentists do not follow this advice:

If you or your children do get dental x-rays, be sure you have not only a lead apron covering your chest, but also a thyroid collar, which protects your thyroid (an area that’s particularly vulnerable to radiation damage).

In case you’re wondering why it’s so important to limit unnecessary x-rays, including those from dental exams, research has shown that people who have ever had a dental x-ray called a bitewing exam are more than two times as likely to develop a type of brain tumor called a meningioma.[iv]

Those who had the x-rays done on a yearly basis, or more often, were 1.4 to 1.9 times as likely to have had a meningioma. Among those who had a panorex dental x-ray, which puts a scan of all of your teeth on one film, before the age of 10 were nearly 5 times more likely to develop the tumor.

While meningiomas are not cancerous, they can cause stroke-like symptoms including seizures, headaches, and problems with vision, speech and motor control.

1. The Potential for False Positives and “Overtreatment”

This is an issue that relates particularly to mammograms, which is an x-ray picture of the breast used to screen for cancer. Mammograms sometimes lead to false positive results, leaving a woman thinking she has cancer when she actually does not. This will lead to additional x-ray exposure, invasive biopsy and sometimes even cancer treatment and surgery unnecessarily.

Mammograms also can detect cases of ductal carcinoma in situ (DCIS), which is a non-invasive tumor that may or may not become cancerous. All cases of DCIS are treated, even though some of them will never cause symptoms or threaten a woman’s life. This potential for overtreatment and false positives, along with the cumulative radiation exposure that all mammograms contribute to, must be taken into consideration when considering this procedure.

How to Build Your Body’s Resistance to Disease…

… and thereby reduce your need for medical imaging tests like x-rays?

Check out the secrets in this “natural health bible.” Thousands swear they’ve CURED themselves of chronic pain and disease using the methods described in this book — and it’s yours, FREE, today. The more you do now to keep yourself healthy, the less you’ll have to rely on the conventional medical system later.