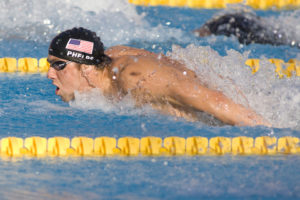 In the Olympics, a fraction of a second can mean the difference between a gold medal and an “also-ran” performance.

That’s why trainers and athletes turn to any effective method necessary to keep them at the top of their game.

And this year, one of those methods has been splashed all over the news as Olympic athletes from swimmer Michael Phelps to gymnast Alexander Naddour show up in Rio with peculiar looking marks on their bodies.

Rather than injuries, the marks indicate the athletes have again relied on a 3,500-year-old remedy called cupping, popular in Traditional Chinese Medicine and various other natural healing cultures from around the world.

Of course, members of our Live Pain Free® community were already aware of the history and benefits of cupping thanks to an article in our April 2015 issue where we explored this natural pain and healing treatment.

What is one of the oldest healing practices known to man still relied on today – even by well-known Hollywood celebrities like Jennifer Aniston, Lena Dunham and Gwyneth Paltrow? Or NFL defensive ends like the Bronco’s DeMarcus Ware, who claims the therapy has helped him feel stronger, faster and more flexible than ever?

If you answered “cupping” you would be correct.

According to the British Cupping Society, “Cupping therapy is an ancient medical treatment that relies upon creating a local suction to mobilise blood flow in order to promote healing.” In fact, cupping is used to treat a wide variety of ailments including blood disorders, arthritis, respiratory conditions, migraine, anxiety and depression, among others.

Although cupping is classified as a Traditional Chinese Medicine (TCM) treatment, it was also used by ancient healers as distant from China as Egypt and Greece. Cupping is even described in the Ebers Papyrus, an Egyptian medical text dated back to 1,550 BC.

Not only is cupping making a resurgence in recognition as a medical therapy, it’s become so commonplace in some areas of China that it’s a regular service provided by street vendors in Yunnan Province. 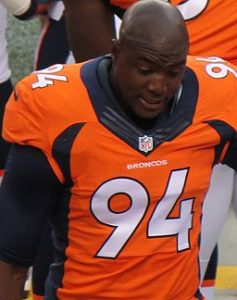 “It keeps your pores open and it sucks that bad blood that’s on the surface of your epidermis. The skin. It helps with blood flow. It helps out a lot.

I feel better than I did the last two years going into the season. Stronger, faster. I feel flexible.”

During cupping, suction is typically created along meridian lines on your back and other areas of your body using glass, bamboo or plastic cups (or, in ancient days, hollow animal horns).

In fire cupping, before placement the practitioner heats the inside of the cup by swabbing the inside of the cup with alcohol or placing a piece of flammable material like alcohol-soaked cotton or paper inside the cup and lighting it on fire. This removes oxygen from the cup and creates a suction that draws your skin upward into the cup when placed. No flame or heat is applied directly to your skin. Alternatively, the cup is held over a fire to capture heat prior to placement.

Today, many practitioners use cups made from medical-grade plastic or silicone with valves that attach to vacuum pumps to create the suction rather than heat. The suction effect is similar.

Once the cup is placed on your skin, the suction draws your skin upward into the cup. The cup is left in place for three to 10 minutes. During this time, the suction helps remove blood stagnation and toxins found in deep muscle tissue. It provides a pleasant, inverse massage to tissues as much as four inches deep by pulling (rather than pushing) them. Besides encouraging blood flow by opening capillaries and loosening tight muscles, cupping is believed to pull energy into the affected area to improve health and healing. 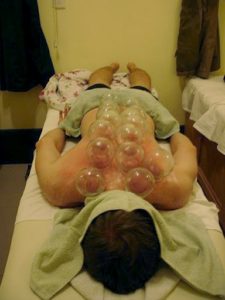 Cupping using silicone cups and hand pumps or regular cupping applied to skin coated in massage oil creates a vacuum that can be moved from place to place. This provides an enhanced massage-like effect, especially effective at relieving muscle tension.

In a form called wet cupping, superficial cuts are made in the skin prior to cupping. This causes a small amount of blood to be drawn out and believed to help expel toxins from the body. This form of cupping has been practiced in Finland since the 1400s and even longer in the Middle East.

Following cupping, round marks remain on the skin where the suction was applied. Sometimes minor bruising occurs. However, since any bruising is caused by expanded capillaries rather than trauma they are superficial – rarely lasting more than a few days and typically painless. Any skin incisions are coated in an antibiotic ointment and bandage and normally heal in 10 days or less.

Modern Studies Back Medical Use of Cupping

Although cupping is an ancient therapy, numerous randomized controlled trials have been conducted since 1950 on the practice. A comprehensive review of 135 of these studies conducted on cupping therapy between 1992 and 2010 appeared in PLoS ONE.

According to the review, “cupping therapy combined with other TCM treatments” (like acupuncture and moxibustion) “was significantly superior to other treatments alone in increasing the number of cured patients with herpes zoster, facial paralysis, acne and cervical spondylosis. No serious adverse effects were reported in the trials.”

Cupping’s effectiveness in treating many more conditions continues to be studied. But at the least, it appears to be a low-risk treatment worth trying for yourself.

[Editor’s Note: For more information on acupuncture and moxibustion, be sure to see the August 2008 issue also found in the Live Pain Free® member archives.]

Not a Live Pain Free® Member? 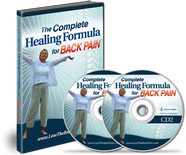 Try a 30-day, risk-free trial membership today and instantly explore over 7 years of back issues, audio interviews, videos and special reports – a complete natural healing and wellness library at your fingertips!

Plus, we’ll send you a FREE copy of our 2-CD audio program, The Complete Healing Formula… yours to keep whether you continue your membership or not.

Click here to learn how to activate your trial membership today!

Pearson J. Joining the craze? Ashley Benson shows off ‘cupping’ marks on her back while shoe shopping in Beverly Hills. Daily Mail. 2015 Feb 16.

Joseph D. Cupping Therapy Is So Popular In China That People Just Do It In The Street. Business Insider. 2014 Nov 30.

The Many Benefits of Chinese Cupping. Pacific College of Oriental Medicine. 2014 Sep 20.