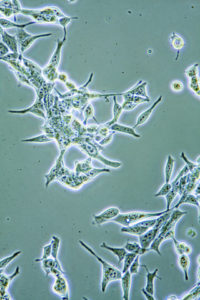 There are many challenges facing the modern “cut, poison, burn” approach[i] to cancer treatment, not the least of which is the fact that chemotherapy and radiation are inherently toxic to your body’s healthy cells.

The tumor might recruit immune-suppressor cells, for instance, or use a “shield” of sorts made from fibrin — and here’s where things really get interesting.

Fibrin Acts as a Cancer Shield

Fibrin is an insoluble protein that creates a mesh that stops blood flow (it’s what makes up scar tissue). As early as 1960, researchers found “large clots” of fibrin in most of the tumors they tested.[ii]

It’s been known for even longer, perhaps for more than a century, that fibrin is involved in the “persistence and progression” of cancer. And more recently it’s been revealed that fibrin is a part of the supportive framework in certain human tumors.[iii] Dr. William Wong, ND, PhD, explained:[iv]

“CA (cancer) cells are covered with fibrin… as the cells glom together to form tumors these growths themselves are armored with fibrin. This thick protective coating is designed to prevent the body’s own defenses (i.e. natural killer cells, white blood cells or oxygen) from getting inside the cell or tumor to destroy it.

Would it not make sense to have something strip away the outer fibrous wall of CA so that whatever agents we are using as medicine, whether natural or otherwise, can actually get into the cell and do their job?”

Indeed, it would make sense, and proteolytic enzymes are just the compound to do it.

In drug studies, proteolytic enzymes are routinely used to do just that — dissolve the fibrin shield on cancer cells so the tumor becomes vulnerable to the drug being tested! According to research published in the journal Medical Hypotheses:[v]

“The tumor dons a ‘coat’ of the host’s own protein on its cell surface. The coat is composed of fibrin and of a polymeric form of human serum albumin (HSA)… Such a coated tumor appears as ‘self’ to the immune system, and thus is not detected as a tumor by the immune system…

When tumors are prepared for in vitro assays against drugs, they are routinely treated with proteolytic enzymes… which dissolve the protein coat, exposing the tumor cell surface to the drug.”

The reason why some cancer drugs may appear to work in laboratory testing and then fail to act in real people may be due to the cancer shield — it’s broken down with proteolytic enzymes during the lab tests but not in the real world, unless, possibly, the patients happen to be taking proteolytic enzymes.

Enzymes have been used in studies of cancer treatment before. In 2007, an animal study published in the journal Planta Medica found that bromelain, an enzyme found in pineapple cores, treated cancer better than a chemotherapy drug — without toxic side effects.[vi]

No matter what your reasons for seeking proteolytic enzyme therapy, you’ll want to be sure you’re putting your money (and your health) into a product that actually delivers what it claims.

In 2010, we switched manufacturers to incorporate a new, lower-heat processing technique. At this time we also doubled the dose of enzymes contained in the formula — for the first time. Our latest and most powerful formula has double the dose again — which means Heal-n-Soothe® now has four times the enzymes it did in 2007.

In each three-capsule serving, you now get 750 milligrams (mg) of systemic enzyme blend. Heal-n-Soothe® has five different enzymes in all, carefully chosen because each is triggered to go into action at different times and for different reasons.

You can read more about why Heal-n-Soothe® is the world’s best proteolytic enzyme supplement here, but suffice to say it’s the one I not only helped develop but also personally use.

Or, even better, give our new formula a try… on us!