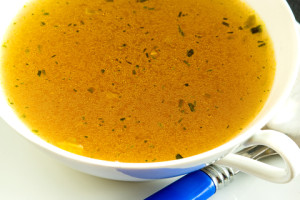 Humans have been boiling animal bones in water, and drinking the resulting nourishing broth, since ancient times. Your grandmother probably also had a recipe for bone broth or stock and used it as a base for soups, stews and gravies – just as most good restaurants do today.

Yet if you happen to be in New York City, you might see people walking down the street with a steaming cup of broth instead of coffee, as bone broth has emerged as a trendy “new” health drink. Wise Choice Market, which sells its own version of bone broth online, lists several historical references to bone broth, which show its ancient roots:[i]

Indeed, in the modern day, many people report gaining energy, soothing digestive troubles and feeling stronger after drinking the broth. It’s even said to be useful for relieving joint pain and arthritis. While there’s little scientific research yet to support its use, simmering bones gently for hours helps to release beneficial nutrients into the broth.

Among them are collagen, which is beneficial for joint health, gelatin, which helps with digestion, and a host of other vitamins and minerals, including calcium and vitamins E and C. Bone broth is so nourishing that Dr. Cate Shanahan, the director of the Lakers PRO Nutrition Program, uses it as a key part of the Lakers’ diet.[iii] Kobe Bryant has even credited it for its healing effects, telling ESPN:[iv]

“I’ve been doing the bone broth for a while now… It’s great — energy, inflammation. It’s great.”

If you’re interested in trying bone broth for its health potential, avoid the stock and broth sold at the typical grocery store. Most store-bought stocks are made with low-quality ingredients and have added sodium, sugar, artificial flavors and artificial colors to make them taste good. When you make bone broth yourself, you’ll get a rich flavor naturally, and you’ll know it’s high quality if it turns into a jelly-like consistency when you put it in the fridge.

Aside from the time element (some recipes call for simmering the broth for 24-48 hours), bone broth is incredibly easy to make (you can cook it in a slow cooker, too). If you want to give it a try, here’s a recipe posted by The Nourishing Cook,[v] which comes from Sally Fallon’s Nourishing Traditions cookbook:

“You will now have a pot of rather repulsive-looking brown liquid containing globs of gelatinous and fatty material. It doesn’t even smell particularly good. But don’t despair. After straining you will have a delicious and nourishing clear broth that forms the basis for many other recipes in this book.”

NEXT UP, DON’T MISS…

6 thoughts on “This Ancient Soup is HOT Again (here’s why… plus recipe!)”