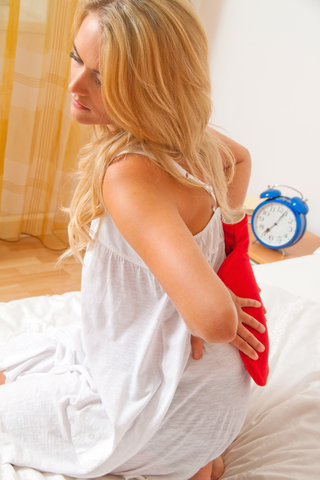 Wouldn’t it be nice to roll out of bed feeling flexible and spry? Unfortunately for many, the reality feels more like waking up as the ‘tin man,’ needing a generous squirt of oil to get your body moving.

This stiffness occurs, in part, because when you sleep your body slows down and stops processing interstitial fluid. What’s interstitial fluid? It’s the fluid that surrounds your cells (it’s sometimes called tissue fluid) and it’s composed, primarily, of water.

Edema, or swelling, is actually the result of excess accumulation of interstitial fluid, and if you’ve ever had it then you know stiffness goes right along with it. Edema is an extreme example of what happens when interstitial fluids build up in your body, but it happens to some extent each night as you sleep.

The excess fluid may make you feel stiff upon waking, and, worse, could make you especially prone to injuries if you exercise first thing in the morning. One simple trick to get rid of excess interstitial fluid is to use the bathroom once, twice or even three times after waking. With each urination, you’ll rid your body of some of the fluids so you’ll feel more flexible.

Your Joints May Need a Quick ‘Warm Up’

If you have underlying joint or back pain, morning stiffness can be especially problematic, as your joints may take longer to ‘warm up’ after sleep. You see, your joints depend on joint fluid for lubrication and smooth movements, but during sleep your cartilage essentially soaks up this fluid (much like a sponge soaking up water). When you wake up and bend your knees, for example, this movement squeezes the cartilage, causing the joint fluid to come out and surround the joint once again.

Ideally, and if your joints are healthy, this should happen in an instant (and if it does, you’ll likely have no morning stiffness, or barely noticeable stiffness). However, if your cartilage is in any stage of deterioration, meaning you have less of it than you should, or it’s damaged, you’ll also have less joint fluid (and therefore less effective lubrication of your joints).[i] Not only does this often lead to stiffness upon waking but also pain.

Once your joints have ‘warmed up,’ however, they will often begin to feel better, which is why doing some light stretching, even before you get out of bed, may be helpful.

“The phrase “morning stiffness” refers to the pain and stiffness you may feel when you first wake up in the morning. Stiffness usually lasts for 30 minutes or less. It is improved by mild activity that “warms up” the joint.”

There’s another underlying cause of morning stiffness and that is inflammation. It’s well known that in conditions such as arthritis, the lining of your joint becomes inflamed.

You can fight inflammation via your diet (try these six inflammation-fighting foods, for starters), as well as take advantage of our 7 years of research and development, which lead us to uncover 12 of the most potent and natural anti-inflammatories in the world. We’ve combined them all into one all-natural formula … Heal-n-Soothe.


One of the (many) factors that makes Heal-n-Soothe unique is that it provides your body with proteolytic enzymes, which are the #1 way to end the chronic inflammation that underlies most pain and, potentially, morning stiffness.

Finally, if you’re stiff (or in pain) in the morning, check out the video below. It shows you how to get out of bed safely and easily.

2 thoughts on “Why You Wake Up Stiff (and how to avoid it!)”