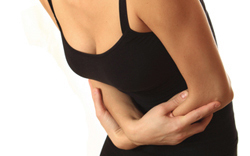 Uterine Fibroids can cause abdominal cramping

Uterine fibroids (or leiomyoma) are non-cancerous tumors that grow in and around a woman’s uterus beginning in her childbearing years.

Though many fibroids are asymptomatic, many have severe symptoms leading to choices as drastic as a hysterectomy to treat them. While conventional treatments for uterine fibroids include surgery, drugs and hormonal treatments, natural treatments show promise in eliminating the need for more drastic measures.

Since a diagnosis of uterine fibroids tends to come as a shock to many women, let’s go through exactly what they are.

Benign tumors, uterine fibroids are made of smooth muscle and fibrous tissue, most commonly found within the wall of the uterus. They also may appear just below the innermost layer, near the outer wall of the uterus or growing completely outside the uterus.

Fibroids can be microscopic … or grow as large as several pounds.

Even though uterine fibroids are non-cancerous, that doesn’t mean they don’t grow. They just don’t spread to other organs. But like cancer, genetic defect has been implicated as the cause of the tumor in as many as half of all patients.

Fibroids appear to be hypersensitive to estrogen, which women have in abundance during childbearing years. The uterine tissue reacts to estrogen by enabling progesterone receptors–and in vivo studies have shown progesterone is essential for tumor growth.

Because of their reaction to high levels of estrogen and progesterone, fibroids have been known to stop growing or even shrink after menopause.

Fibroids are known to cause an array of symptoms including:

The Mayo Clinic recently surveyed 1,000 women who had fibroids for an average of 9 years.

Dr. Elizabeth Stewart, lead author of the study, said, “Many people are unaware that the vast majority of women will experience uterine fibroids in their lifetime and that this condition can cause significant morbidity for those who are symptomatic.” (emphasis added)

The survey showed these benign growths might cause as much concern as a life-threatening disease.

And a 2014 study published in the Journal of Sexual Medicine reported out of 827 women with uterine fibroids greater than 0.5 centimeters, fibroids were significantly related to serious pain during sex, especially when fibroids were located at the top of the uterus.

There is no definitive pharmaceutical cure for fibroids. But that doesn’t mean modern medicine isn’t trying.

Since fibroids are sensitive to estrogen, the main pharmaceutical approach is to suppress natural estrogen production with drugs. These come in the form of birth control pills, intrauterine devices and injections of synthetic hormones progestin and estradiol. Although these treatments appear to keep the fibroids from growing, they come with their own host of side effects.

Another study published in the Journal of Sexual Medicine showed women who took birth control pills experienced elevated levels of sex hormone binding globulin (SHBG), a protein that makes testosterone unavailable for the body’s use. Women on the pill for longer than 6 months were at risk for long-standing health problems and sexual dysfunction.

Plus, synthetic hormones have actually been indicated in making fibroids worse.

For a symptoms management approach, doctors recommend taking NSAIDs for pain. But these come with serious risks especially with long-term use, such as gastrointestinal damage, ulcers and bleeding.

Your doctor may also recommend a more extreme route: remove the entire problem with a hysterectomy. 50% of all hysterectomies in the United States are now performed due to uterine fibroids.

Another less invasive surgical option is the uterine artery embolization. A radiologist feeds a tiny wire through the femoral artery to place microparticles into the artery feeding the fibroid. These particles then block the fibroid’s blood supply.

Even though newer, less invasive treatments are now being tested such as high-powered ultrasounds that break up the fibroid like a kidney stone, they are still experimental, expensive and carry potential complications.

Fortunately, there are safer alternative approaches to treating uterine fibroids.

Since fibroids grow under natural causes (estrogen and genetic defect), it follows that there is a natural, effective cure.

Natural medicine has made incredible strides toward preventing and treating uterine fibroids naturally.

Here are some promising discoveries:

The Most Promising Uterine Fibroid Natural Treatment (and it’s FREE!) 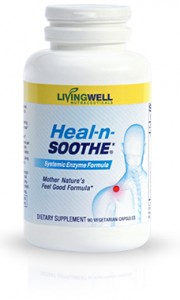 Besides the proteolytic enzymes which help break down excess fibrin, Heal-n-Soothe® includes a dozen powerful natural anti-inflammatories that help you feel better without the dangerous side effects of NSAIDs and other painkillers.

You owe it to yourself to try a safer, gentler approach to uterine fibroid treatment. And you’ll find it when you take Heal-n-Soothe® …

Discover the healing power of all-natural
Heal-n-Soothe® and try it FREE today!

Moshesh M. Examining the Relationship Between Uterine Fibroids and Dyspareunia Among Premenopausal Women in the United States. Journal of Sexual Medicine. 2014 Jan. 28.

5 thoughts on “Uterine Fibroids – A Safe and Powerful Treatment”