The Feldenkrais Method: Mind/Body Awareness (and Pain Relief) Through Movement

Complementary and alternative medicines (CAM) are those non-mainstream treatment modalities that mainstream physicians have deemed useful as a complement to their pharma-based treatments. The whole idea of CAM is obnoxious, as it looks for bodywork and energetic methods to support a drug-based therapy. Doesn’t it seems more appropriate and natural to use pharma as the complement to so-called alternative therapies, should the alternative herbals and supplements not be strong enough… but that is another story.

In this article I would like to share with you one of the lesser-known alternative therapies called The Feldenkrais Method, named after its founder, Moshe Feldenkrais. It is a method of educating people through movement about the function of their body and its relationship to thought. Its movement practices, while helping with tight muscles, muscle imbalances, impingements and pain, are also focused on “refining the use of the self through somatic awareness.” In other words, it is a mind/body practice… and that’s a good thing.

Who Benefits from Feldenkrais?

The Feldenkrais Method is the perfect therapy/tool for anyone wishing to improve their general awareness, their thought-to-movement relationship, and their range of motion and to reduce restriction, tightness and pain. It is specifically good for those who suffer chronic tight muscles, limited range of motion, osteoarthritis and for athletes of all kinds.

Indeed, practitioners of this method are fond of saying: “Learning to move with less effort makes daily life easier.” More than that, they remind us “we learn to use our hands well enough to eat, our legs well enough to walk. Our abilities to function with a greater range of ease and skill, however, remain to be developed. The Feldenkrais Method teaches—through movement—how we can improve our capabilities to function in our daily lives.”

The Feldenkrais Method is taught is two phases, or forms: Awareness Through Movement® and Functional Integration®. 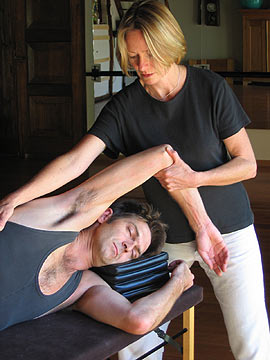 The first form, Awareness Through Movement, is taught in a class setting where participants are led through movement sequences through the verbal instruction of the teacher. The class is generally 30-60 minutes in duration and explore thinking, sensing, moving and imagining structured around ordinary functional movements of our daily lives. The movements start out slow and easy and build over time to more complex series that provide greater release and range of motion. Awareness Through Movement aims to “make one aware of his/her habitual neuromuscular patterns and rigidities and to expand options for new ways of moving while increasing sensitivity and improving efficiency.”

Since each class is organized around a specific function, several classes would be needed to learn the physical movement sequences necessary to rebalance your mind and body to reduce pain and free restrictions.

The second form, Functional Integration, is the hands-on aspect of the method. This is similar to the work of a massage therapist or stretching coach, but without the harsh rubbing, pressing or pushing. A practitioner of the Feldenkrais Method guides the client through movement sequences that are gentle and non-invasive. Practitioners say their method is a form of “tactile, kinesthetic communication.” Through the session, the practitioner is able to feel and sense what is going on in the client’s body and tell them how they organize their body, and shows them through guided movement, how to move in more expanded functional motor patterns.

In Functional Integration, the practitioner creates a lesson plan for the client, based on their specific needs. The work is carried out while the client is lying on a low and wide table, sitting or standing… depending on the exercises.

It is apparent that the Feldenkrais Method is somatic, energetic, intelligent and helpful to the body and ultimately the life of those who become involved with in at various levels. It is a painless healing method that reconnects people with their natural abilities to move, think and feel. The gentle lessons can improve ones overall wellbeing and make them whole again while sitting at the desk, in the car, engaging in gardening or sports or playing with their children or grandchildren.

To learn more about the Feldenkrais Method, or find a practitioner near you, visit: www.feldenkrais.com

50 Years of Back Pain Gone in Just Days!

Jerry Talisman had suffered from chronic back pain on and off for over 50 years. Like most people, he had tried it all… chiropractors, physical therapy, he even overdosed on tylenol but nothing gave him lasting relief until he discovered muscle balance therapy.

Unlike most treatments which only deliver temporary relief, if any at all, muscle balance therapy delivers lasting relief to 8 out of 10 people who use it because it addresses the underlying cause of the pain, not just the symptoms.

If you suffer from any type of back pain, neck pain or sciatica, I urge you to learn more about this breakthrough new treatment. Click here to learn more…