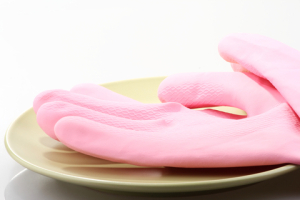 Do you ever walk into your house and breathe a big sigh of relief that you’re home? It’s second nature, as our homes are (ideally) our place of respite from the outside world.

Unfortunately, your house is also home to chemicals and other toxins – a lot of them. With each breath of your home’s air, one study found you could be inhaling up to 400 different chemicals, some of which researchers couldn’t even identify. Among those that were identified were pesticides and “a wide array of hydrocarbons, fragrances such as the musk xylenes, flavors relating to spices, aldehydes, alcohols, esters and phthalate esters, and other miscellaneous types of chemicals.”[i]

These chemicals are there courtesy of some of your most beloved home goods; they outgas into your air or into your household dust (which is then circulated into your air). Other items you don’t think twice about may also pose unique hazards to your family aside from air pollution.

You may have thought about doing a detox for your body … but what about your home? It’s a good idea to conduct one at least annually, and the first step to any detox program is removing the most toxic elements around you … I’d recommend starting with these that follow …

Trash These Toxic Home Goods for a Healthier Family

Carpet is a synthetic material, made from petroleum byproducts, nylon, acrylic, PVC and more. These substances outgas toxic chemicals such as volatile organic compounds (VOCs) and formaldehyde into your home’s air. VOCs have been linked to cancer and damage to the liver, kidneys and central nervous system. Your carpet is also a ready home for mold, bacteria and viruses. According to one expert, Phillip Tierno, director of Clinical Microbiology and Immunology, NYU, your carpet may contain 200,000 bacteria per square inch, which would make it 4,000 times dirtier than your toilet seat.[ii] You can learn about safer flooring options here.

The air vented from dryers using scented dryer sheets has been shown to contain hazardous chemicals, including acetaldehyde and benzene, which are classified as carcinogens by the U.S. Environmental Protection Agency (EPA).[iii] Worse still, they coat your clothes with chemicals like acetone (found in nail polish remover) and quaternary ammonium compounds, which are linked to asthma.[iv]

Most oven cleaners contain sodium or potassium hydroxide, which help dissolve the baked-on debris. However, they can also burn your skin, lungs and eyes. Some also contain high concentrations of butoxydiglycol (DEGBE), a solvent banned in the European Union at concentrations above 3 percent in aerosol cleaners because it may irritate and inflame your lungs. To clean the bottom of your oven, sprinkle it with baking soda (liberally) and then spray with water. Let it sit for eight hours then scrape off.[v]

The sponge you use to wash dishes and clean your kitchen counter may contain 10 million bacteria per square inch and be 200,000 times dirtier than your toilet. Dr. Roxanne Sukol, medical director of the Cleveland Clinic’s Wellness Enterprise, told the Wall Street Journal, “There is a forest of bacteria, spores, even pathogens, in a sponge—not just one single culture … It becomes contaminated the minute you touch it.”[vi]

Replace your kitchen sponge at least two to four times a month, and run it through the dishwasher (or microwave it, wet, for 60 seconds) regularly. Those latter tricks have been shown to get rid of nearly 100 percent of the lurking bacteria.[vii]

Pesticides aren’t only toxic to pests … they’ve been linked to obesity, leukemia, Parkinson’s disease and other health problems in humans as well. And once you use them in your home, they’re there to stay. One study by the EPA found that not only are most kitchen floors in the US contaminated with pesticides, but they can linger there for a decade.[viii]

Swap all forms of pesticides (including those used for flea/tick treatments on pets and lice treatments) for natural alternatives. Natural castile soap or vinegar mixed with water works to keep many pests away. Essential oils including lemongrass, cedar and eucalyptus also help to repel pests.

2. Plastics Marked With #7 and Canned Foods

These are potential sources of bisphenol-A (BPA), the endocrine-disrupting chemicals that’s been making headlines for years now due to its potential links to cancer, productive problems, obesity, heart disease and more. When storing food, glass is a better option than virtually any form of plastic, as even BPA-free plastics have been shown to release estrogenic chemicals that may cause adverse health effects.[ix]

1. Your Couch Cushions and Mattress

These are common sources of flame-retardant chemicals, which may migrate into your home’s air, settle into household dust and ultimately be inhaled by you and your family. These chemicals have been linked to reproductive disorders, cancer, brain damage and more, and they pose an especially serious threat to children and pregnant women.

When choosing furniture, look for naturally flame-resistant materials like wool, cotton or jute. Avoid those with the TB 117 label (which is the California flammability standard) and instead look for TB 117-2013 (which was recently updated to no longer require the use of such chemicals, although it is not a guarantee of their absence). When buying a mattress, use this natural mattress buyer’s guide to find a toxin-free option.