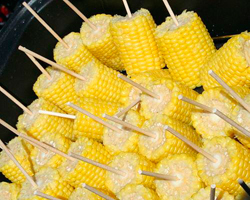 How much corn should you eat for a healthy diet?

There’s nothing like a good piece of corn on the cob at your summer barbeque or your buttered popcorn to go along with your favorite movie, right? Or wrong?

This question seems to be coming up more and more often… Isabel, are corn and foods made from corn allowable on The DSP?

Well, the answer is yes, BUT there are a few details you need to know first (you didn’t think I was just going to leave it at that, did you?)

It’s been approximated that about 60% of the corn, now in the U.S., is genetically modified (although, I do think this number is higher now). The practice of genetically modifying corn began in an attempt to make corn crops resistant to certain pesticides. This helps the farmer because they are then able to grow a larger crop because it is easier to fight off pests (they can spray the crops with pesticides and get rid of insects without damaging their crop).

Sweet corn has also been genetically modified (now called Bt-corn) so that it produces a poison which kills harmful insects. This means the farmer no longer needs to fight insects with insecticides.

Now although some of these may sound like a good thing (especially if you’re a farmer!), we need to consider how GMO foods respond in our bodies and what kind of long term effects they can have on our health.

Well, because the introduction of GMO foods is still relatively new, we’re in a way being used as “guinea pigs” in a massive experiment (Yikes!). In April 2007, Arpad Pusztai, from the Rowett Research Institute in Aberdeen, UK, announced that experiments had shown intestinal changes in rats caused by eating genetically engineered potatoes (and I don’t know about you, but I’m not happy about anybody trying to mess with my intestines).

This actually doesn’t surprise me. It’s amazing to me how many more people now complain of things like irritable bowel syndrome and other nagging digestive problems. I’m not saying that eating GMO foods is the only cause for these conditions but I’m sure it’s a significant contributor (along with processed foods, but that’s a story for a different day).

Ok, so what if you’re able to get non-GMO corn? (Which it is difficult to know which brands and items are GMO and which are not) where does corn fit into your DSP meal plan?

First, your body reads corn as a grain, NOT a vegetable so if you are to include it into your meals, this will be the grain (carbohydrate) for your meal. So having corn and brown rice would be having 2 grains in one meal. This is not necessarily off limits and not “bad” in any way, just consider if you are someone who is sensitive to grains, you will lose weight faster by greatly reducing the number of grains you eat each day. You may want to take 2 — 3 weeks and follow the “no grain” meal plans in the Diet Solution manual and see if that helps break through any weight loss plateaus and/or helps your digestion.

What about microwave popcorn?

Well even the organic varieties contain preservatives (of course to keep them in the bag) and have been shown to contain the same chemical coating in the bag that is used on non-stick cookware (double YIKES!). I would stay away from this stuff.

How about air popped popcorn?

This is your best bet and can definitely be used as an occasional snack. But notice I said “occasional”. Remember most people lose weight faster by decreasing (not necessarily eliminating) many grains. Snacking on popcorn every day could and most likely will, impede your weight loss efforts.

I hope this information helps you to make a more informed decision at your next barbeque and at your next movie night. Remember, corn is not off limits by any means, just remember you’re looking for the non-GMO varieties and including it as a grain and not a vegetable into your meal plans.

1 thought on “The Truth About Corn”