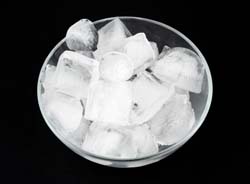 Is a bowl of ice a beverage cooler for you… or a meal?

Do you have an “addiction” to uncommon foods? Late night runs for chocolate, ice cream and pickles are legendary among pregnant women. But you don’t have to be pregnant to have a strong craving for unusual foods… or even non-foods.

A small but significant portion of our population has a strong desire to eat particular foods like chocolate and potato chips. But a strong desire to chomp large quantities of ice, eat cornstarch, or even handfuls of dirt are more common than you may think.

Known as pica, the urge to eat non-foods is named after the Latin word for magpie, a bird with a broad omnivorous diet. Often, though not all of the time, these cravings are associated with a nutritional deficiency.

Cravings can occur with actual foods as well. In both cases, cure the deficiency and chances are the cravings will quickly subside.

Here are some of the most common cravings and the nutritional deficiencies each may represent:

Enjoying a little ice at the bottom of your drink isn’t reason for concern, but if you have an irresistible urge to chomp through cupfuls, or even bagfuls, of ice on a regular basis it can be a sign of anemia.

Compulsive ice eating, or pagophagia, is one of the most commonly recognized forms of pica. While eating ice won’t resolve the iron deficiency, some speculate that it helps tongue pain and inflammation associated with anemia. Correcting the iron deficiency often results in an immediate reduction in the desire to eat ice.

Dirt or Clay (even Rocks!)

Scooping up a handful of dirt and eating it may be the last thing on most folks’ minds, but if it’s on yours you’re likely deficient in iron and possibly one or more additional minerals including magnesium, zinc or copper. Called geophagia, eating clay or dirt is a form of pica more common when pregnant and among those of non-European ancestry. 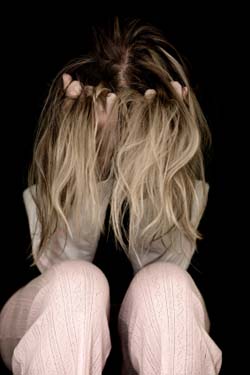 Usually the ingestion of your own hair, or trichophagia, is associated with trichotillomania, where a person pulls his or her own hair out. This is considered a compulsive psychological disorder and may lead to indigestion, stomach pain and even a potentially fatal hairball (from intestinal blockage).

Amylophagia, or compulsive eating of starch, is another common manifestation of pica. Just like eating dirt or clay, a compulsive desire to eat plain starch has been linked to iron and other mineral deficiencies.

Most of us like chocolate, and many have an emotional attachment to eating the confection. But strong cravings to eat more than a few ounces a day can be a sign of a magnesium deficiency.

Known as hyalophagia, this eating disorder is particularly dangerous as broken glass can cut your throat, stomach and intestines leading to potentially deadly internal bleeding. Experts believe glass eating is associated with vitamin or mineral deficiencies, mental illness and / or severe stress.

Pencils, paper, tree bark and even wooden furniture in your diet could be related to a psychological disorder. But xylophagia is often an attempt to deal with tooth pain or as a substitute for smoking. Look for healthier options.

All salt is not equal. Most salt found at your local grocery store is devoid of any nutritional value other than added iodine in some brands. Too much salt can tax your kidneys. If you find yourself constantly craving more salt, it may be your body is looking not just for chloride but also magnesium and other trace minerals found in salt in its natural unrefined state, particularly Celtic sea salt.

Do You Have a Mineral Deficiency? 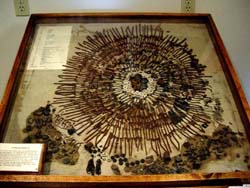 This artistic but lethal display of 1,446 nails, screws and other metallic items were removed from a woman who swallowed them all - then died from internal bleeding

The list of cravings above is far from complete. Even cravings as seemingly bizarre as eating paint chips, burnt matches, screws and cigarette ashes frequently point to nutritional deficiencies.

But here’s the catch: even if you don’t have cravings, you may have severe deficiencies that manifest in other ways such as pain, fatigue, and insomnia.

And if you do have unusual food (or non-food) cravings, please investigate further. Often there is a medical consequence from untreated pica. Just in the decade from 1999 to 2009, hospitalizations for pica have nearly doubled in the United States.

That’s why I recommend asking your doctor to run a full test of your vitamin and mineral levels if you have unexplained food cravings. What you discover may not only help you curb strange food cravings and mystery pains, in some cases it might literally save your life.

Whether you suffer from unusual conditions like pica, are looking to overcome various other health challenges, or simply want to transform your living into a life of vibrant health – we have the answer for you!

Every month we publish articles just like this one for members of my Health + Fitness Inner Circle in our premium Get Healthy & Fit® print newsletter.

Along with the monthly print issue members receive a special audio CD featuring an interview with a leading health and fitness personality – or even an occasional health and fitness DVD. Plus, members get instant access to the entire archive of back issues, recent interviews and other special bonuses.

We invite you to start your New Year in a healthy direction by enjoying a free trial membership. Just for giving it a try we’ll send you a copy of our Pilates Made Easy workout DVD, perfect for getting in shape fast! There’s no risk and no obligation to continue your membership, so why not give it a try today?

Click here to get your Free Pilates Made Easy and
Get Healthy & Fit® Free trial membership now!

Kettaneh A, et al. Pica and food craving in patients with iron-deï¬ciency anemia: A case-control study in France. The American Journal of Medicine. 2005; 118, 185-188.