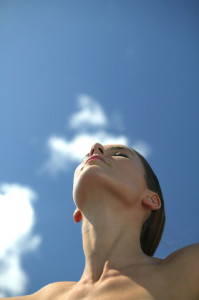 About 24 million Americans have chronic obstructive pulmonary disease (COPD), but more than half don’t know it – even though they have symptoms.[i] That’s because the increased breathlessness and frequent coughing that accompany COPD are often mistaken for something else, or even just assumed to be a ‘normal’ part of aging.

In the early stages, COPD may cause few symptoms at all; shortness of breath usually develops years into the disease, as it progresses and becomes more severe.

COPD is actually a term used to describe several lung diseases that are progressive, including:

While COPD is most common in current or former smokers, nearly 25 percent of people with this condition have never smoked.[ii] Exposure to second-hand smoke can also cause COPD, as can exposure to pollutants at work (fumes, chemicals, dust, etc.).

There is also a subset of people with Alpha-1 Antitrypsin Deficiency (AATD), a genetic risk factor in which your white blood cells harm the lungs, leading to COPD (even in the absence of smoking or pollutant exposure).[iii] COPD may also occur in people without AATD who have never smoked, leading experts to believe there may be multiple genetic variables involved.

Because COPD is progressive, it tends to get worse over time. Conventional treatment typically involves a number of medications – from bronchodilators and steroids to phosphodiesterase-4 inhibitors, which are designed to reduce inflammation in the airways. Medications are often combined with oxygen therapy, pulmonary rehabilitation and even surgery or lung transplant.

However, if you or someone you love has COPD, you should know that inflammation plays a primary role (hence the use of anti-inflammatory medications). As reported in the Journal of Allergy and Clinical Immunology:[iv]

“Chronic obstructive pulmonary disease (COPD) is a progressive syndrome of expiratory airflow limitation caused by chronic inflammation of the airways and lung parenchyma. The airway inflammatory response in COPD is initiated by smoking in the overwhelming majority of cases, and chronic exposure to cigarette smoke initiates a series of events that causes damage to central airways, peripheral airways, and terminal airspaces, leading to physiologic and clinical abnormalities.”

And that would be proteolytic enzymes. These systemic enzymes work throughout your entire body to help it fight inflammation. As reported by NYU Langone Medical Center:[v]

Part of the reason why reducing inflammation is so important in COPD is that it may reduce the rate at which your lungs fill with scar tissue (including fibrin, which makes up scar tissue). As noted in Thrombosis and Haemostasis:[vi]

“Elevated fibrinogen and C-reactive protein (CRP), being common in COPD, are associated with formation of dense fibrin clots resistant to lysis [breaking down].”

Here proteolytic enzymes are again invaluable because they eat up scar tissue in your body. As explained by William Wong, ND:[vii]

“It is through the medium of the corticosteroids that medicine tries to bring down the inflammation and by so doing tries to reduce the rate at which the lungs fill with fibrosis. Most everywhere except for Germany, Japan and Central Europe medicine has not heard of systemic enzymes and don’t use them widely. So in most of the countries of the world there is nothing available to eat (lyse) away at the fibrosis growing within the lungs of COPD … patients.

… I’ve spoken to a number of COPD … patients who have tried … systemic enzymes … either on the recommendation of a health care professional or on their own. So far there hasn’t been a single one of those patients who did not benefit from taking the enzymes: Increased Vital Capacity (total volume of air drawn into the lungs), increased blood oxygen saturation, thinner lung mucous which is easier to bring up and be rid of. Their stories are so consistent that I’ve proposed a study to finally put the imprimatur of “science” on the clinical results we’ve been seeing.

For those COPD … patients reading this, don’t wait for the studies to be published. You might not have that long … Get on a good systemic enzyme blend … and in 1 month’s time go get your lungs retested. Your doc will be very surprised, you’ll already have figured it out and be running rings around the old you!”

[i] COPD Foundation, What is COPD?

[ii] COPD Foundation, What is COPD?

[iii] COPD Foundation, What is COPD?