We’re always on the lookout for new ways to overcome back and neck pain. Last week at our big quarterly meeting our team had the chance to try out some more new “toys.” 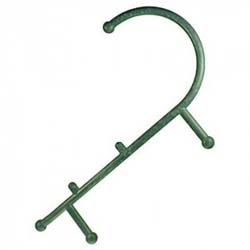 How effective is the Thera Cane for trigger points?

At a recent quarterly meeting our Editorial Manager, Steve Coombes, was experiencing some shoulder pain after driving down to our office in Maryland from New Hampshire. That’s when Steve Hefferon grabbed a tool from his office called a Thera Cane for him to try.

As you can see in the picture, the Thera Cane looks like a short cane with a hook, but with short “sticks” and knobs. Right there at the table Steve C. put the knob at the end of the crook onto a trigger point on his shoulder and started working on the trigger point that was giving him trouble.

If you’re not familiar with them, trigger points are responsible for nearly 75% of all pain. Since the Thera Cane was designed to help relieve trigger points, we made Steve C. our real, live guinea pig for testing the tool’s effectiveness.

Although he told me it helped almost right away, he kept working on his shoulder’s trigger point with the Thera Cane until some other members of our team asked to try it out. Before the end of the day several of us had tried out the Thera Cane on our shoulders and other trigger point areas.

So how well did it work? And would I recommend it?

It did help Steve with his shoulder pain, but I’d have to offer some pros & cons to help you make an informed decision on this one.

Do I recommend the Thera Cane?

While the Thera Cane does offer some benefits for tackling trigger points, it doesn’t offer an easy-to-use comprehensive solution, particularly for those with limited mobility or strength.

I would recommend the Thera Cane as a secondary device to supplement a full trigger point self-treatment system while on the go, or for those on an extremely tight budget. But if you could pick only one tool to help with trigger points, it wouldn’t be my first choice.