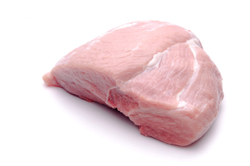 Should the "other white meat"have a place on your plate?

You may have seen pork marketed as “the other whitemeat.” Many cuts of modern pork are indeed quite white and getting lighter all the time. Yet the cuts of pork from the farms around where I grew up varied from pink to reddish brown.

Today’s pork is also a lot drier and less flavorful than my grandfather’s pork. The pigs are a lot different, too. Gone are the fat-laden huge hogs that weighed two thousand pounds. These days, the industry equates leaner with better. But with all this dramatic change, do we really know how healthy these new products are?

Today, we’ll look at the incredibly rapid evolution of the modern pig. We’ll try to rediscover our natural roots in this growing technological experiment with your health. And, maybe we can find a way to still enjoy an old-style juicy pork chop.

My friend FL hunts wild pig in Northern Florida. He always invites me to his pig roasts, and I usually go. If you’ve ever gone to a wild pig roast, you know the meat bears little resemblance to store-bought cuts. The meat is fairly lean and brown. It has a firmer consistency. And, it has a juicy, “gamey” flavor. A good boar weighs in at about 125 pounds and is about 8-10% fat. This meat is probably very close to meat that we’ve eaten for millions of years.

Even after its domestication in Asia about 10,000 years ago, the feral pig changed very little for the next 9,900 years. During the 20th century, Western farmers began aggressively breeding pigs for the highest lard content. By the 1950s mature hogs weighed in at over 2,000 pounds with 50% body fat.

This selective breeding, altered environment, and altered diet of the pig produced a fundamentally different meat no longer natural to our diet. The result contributed to the huge modern epidemic of heart disease in the West.

Now in just the past 25 years, lean meat has become more valuable than fatty meat. With more capable biotechnology, the industry can alter products more dramatically and much faster. Today’s commodity pig weighs only 250 pounds. With only 2% body fat, they’re leaner than today’s supermodels or our best athletes. 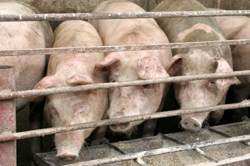 This drastic change in animal husbandry has mostly gone unnoticed. Like so many other examples of food technology, no one asks you if you want to participate in an experiment to change your food. I’m OK with “buyer beware.” But how do you choose if you’re not informed of new changes?

Since our meat has recently had an unnatural high fat content and the wrong kind of fat, leaner meat is mostly good for you. But the new breeds of pigs have been engineered with some disturbing flaws.

The pigs are anxious and sensitive to a degree never seen in nature. At times, these pigs unexpectedly drop dead. Scientists have recently identified a gene unknowingly engineered into the new breeds’ DNA now known to cause “porcine stress syndrome.”

These bioengineered descendents of pigs live in air-conditioned pens of up to 5,000 individuals in exceedingly crowded conditions. The pigs are dependent on antibiotics added to their feed. Huge amounts of pesticides help grow their feed. They add salt and phosphate to the meat to compensate for the lack of juices and flavor. How could anyone know what consuming this new product will do to your long-term health?

Rediscover the Other Red Meat…

With all the interest in a tastier pork chop, some companies are going back to traditional breeds that have darker meat and a little more fat. Not only is organic pork more humane, it’s better for you. The more you know about typical modern pork, the less appeal it has.

Slightly more fat means that farmers don’t have to inject pigs to add moisture. Many of these firms are raising their pigs in smaller groups with access to sunlight and pasture. The best is organic, hormone-free, antibiotic-free, and pasture raised.

To enjoy moist, tender pork, try braising in the oven. This will keep it from drying out. You can also pan-fry a pork medallion with a bit of olive oil. A few minutes before it’s done, add some water and chicken broth. For richness and texture, add a bit of cream.

Japanese Secret for a Healthy Heart