Scoliosis describes a curvature of the spine–instead of going straight up and down, it curves laterally to one side or the other between the neck and the tailbone. 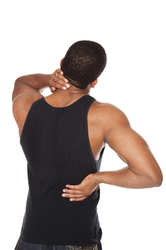 Signs of scoliosis include a shoulder blade that juts out, uneven shoulders or hips, a noticeable leaning to one side, or a rolling walking gait.

Symptoms can include tiredness, joint strain, and back pain.

This problem can be caused by many things, including abnormal muscles or nerves, spina bifida, cerebral palsy, bone abnormalities present at birth, injury, illness, previous surgery, or osteoporosis.

However, mild scoliosis is most commonly caused by muscle imbalances.

Muscle imbalances pull the spine out of alignment and can create a lateral curvature.

Often diagnosed during childhood or the early teen years, it’s reported that approximately 2 to 3 percent of American 16-year-olds have scoliosis.

A very small percentage of those (1/10th of 1 percent) have a curvature extreme enough to warrant surgery.

Girls are more likely to be afflicted with scoliosis than boys, though no one quite knows the reason why.

A brace is a common treatment for those with a spinal curve between 25 and 40 degrees and who still have two or more years of growth. The purpose of the brace is to stop the curvature from increasing. Sometimes, the brace does provide temporary correction; however, when it is removed, the curve often returns to its original condition.

If surgery is warranted, it also serves as a measure to stop further curvature, but it does not correct any curvature that has already occurred.

Even with surgery, it’s likely that perfect alignment of the spine will not occur. A brace may still be needed after surgery, as well as other treatment regimens. 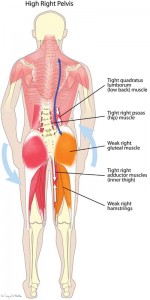 The treatment plan that follows is designed to address scoliosis caused by imbalanced muscles.

As a child, I was diagnosed with a mild case of scoliosis. My doctor wasn’t sure why I had it, but in evaluating the curvature of my back, he noticed it deviated from what was considered typical.

Many years later, as I learned more about the role of muscle balance in back pain, I unintentionally “cured” my scoliosis by rebalancing the muscles in my back and upper body.

I discovered that my particular case of scoliosis was caused by lifestyle factors, not the major medical conditions often associated with the condition.

If you’ve seen a medical doctor and have determined your scoliosis is not caused by a major medical issue, then the following action plan can help you, as it addresses scoliosis caused by lifestyle factors.

These are the three you should begin today, in order of importance