By Martin Sussman
President and Founder

This is Part 2 of a two-article series on how to naturally maintain good vision without surgery. You can find Part 1 which explains the role of nutrition in preserving eyesight with specific advice for Myopia (nearsightedness) here: Feed Your Eyes… Save Your Sight 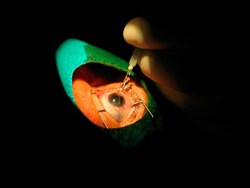 Cataract surgery is the most common surgical procedure in the U.S.

In this article I will focus on presbyopia, cataracts and macular degeneration.

Presbyopia is more commonly known as “middle-aged sight” – the deterioration of near vision as a person ages, with the need for reading glasses beginning at about age forty or fifty.

Presbyopia occurs when the lens loses enough of its plasticity and elasticity so that it can no longer adequately respond to the visual demand to focus at near. The lens has no blood supply of its own, receiving nutrients through the ciliary body. The lens’ cells will break down when they do not receive the proper supply of nutrients. Presbyopia is one symptom of this breakdown. If the breakdown of the lens continues, the stage is set for cataract formation.

Therefore, it would seem logical that the presbyopic eye would respond to the same kind of nutritional approaches that have been shown to prevent cataract formation. In fact, Dr. Gary Price Todd, one of the first nutritional ophthalmologists is finding exactly that. Patients following his nutritional treatment for cataracts are finding that their presbyopia often improves as well.

An Italian study, conducted nearly 50 years ago, found that vitamin E – an anti-oxidant critical in the prevention of cataracts – helped presbyopic people regain their near point vision. Unfortunately, other than this one study, no other nutritional research has been done on presbyopia.

In the United States, approximately four million people have some degree of cataracts, while 40,000 are blinded due to cataracts. One in every five people over 55 are afflicted with cataracts, and as many as half of those over 75 are at risk. Worldwide, cataracts are the leading cause of blindness.

The standard treatment for cataracts is surgery. In fact, cataract surgery is the most common of all surgical procedures practiced in the United States, with more than 500,000 performed each and every year. 94% of cataract surgeries are successful, with lower vision resulting in less than 6 out of every 100 procedures. Though one of the safest operations it still has some degree of risk associated with it.

Even though the surgical treatment for cataracts is highly successful, it is an extremely costly procedure. Each cataract surgery (one eye only) done in the United States costs approximately $5,000. Every year, over 4 billion dollars are spent – just by Medicare alone! – for cataract surgery. 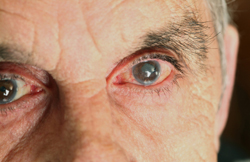 Cataracts are the leading cause of blindness worldwide

As people live longer and longer, the incidence of cataracts can only increase, if no preventative measures are taken. If the development of cataracts could be delayed by 10 years, the National Eye Institute estimates that half of all cataract surgery could be eliminated, saving billions of dollars every year in medical costs.

There is plenty of evidence that cataracts can be prevented, and their growth arrested, with proper nutrition. “With the right nutritional supplements, prevention could be very close to 100%,” says Dr. Todd.

Most research in the United States has focused on the prevention of cataracts. It is a generally accepted fact that cataracts are a degenerative disease caused by free radical damage and that they can be prevented with anti-oxidant vitamins C and E, beta carotene and some trace minerals, including selenium and chromium.

The eye has the highest concentration of vitamin C of any part of the body. Yet, lenses with cataracts have much lower levels of vitamin C than cataract-free lenses. The eye with a cataract has also been shown to be deficient in selenium, copper, manganese, zinc and glutathione (which the body normally produces on its own, but only if adequate levels of selenium are present). Some of the B vitamins – particularly niacin and riboflavin – have also been deficient in the eye with a cataract, though this deficiency is rare in the United States, where many processed foods are “enriched” with these vitamins. Excesses of mercury and other toxins have also been implicated.

According to a recent study conducted by John Hopkins University, people with the highest levels of vitamin E in their blood were 50% less likely to develop cataracts. A study reported in the Archives of Ophthalmology in 1988 showed that 200 IU a day of vitamin E reduces the incidence of cataracts by 56%. If 250 mgs. of vitamin C are added, their incidence is reduced by 86%.

Dr. Todd has been using nutritional supplements for years to treat patients with cataracts. He finds that if nutritional treatment is started soon enough (when vision is 20/50 or better), he is nearly 100% successful in stopping its progression or reversing the cataract.

In one study conducted by Dr. Todd over a 1-year period, 43% of the people showed improvement in their cataract and the other 57% stabilized the cataract completely and showed absolutely no further deterioration. All of these results held up in a follow-up study conducted 5 years after the original. Cataract surgery was avoided in every case.

As a result of this and earlier studies, Dr. Todd has created a complete vitamin and mineral formula different from others that are available. Known as EYEMAX-plus, Dr. Todd uses it as the basis for his nutritional treatment of cataracts. (See below for where to get this formula at a discounted price.)

The macula is the part of the retina that is responsible for fine, detailed vision. A person with macular degeneration loses central vision and also has a poor recovery from exposure to bright lights.

The loss of central vision is due either to a reduced blood supply to the central portion of the retina or to edema (a swelling and leakage of blood vessels in the retina).

According to conventional medicine, there is nothing that can be done to treat macular degeneration, although laser surgery is sometimes used to seal any leaking blood vessels. This surgery is successful only between 4 and 15% of the time (over a 5 year period). More importantly, it doesn’t address the underlying conditions that might contribute to macular degeneration. (There is also a 50% possibility that a person’s vision will be worse immediately after laser surgery.)

The primary underlying conditions in macular degeneration appear to be free radical damage and disrupted blood and oxygen supply to the macular region of the retina.

This would indicate that a nutritional approach that emphasized the anti-oxidant vitamins and minerals – vitamin C and E, zinc and selenium – could be helpful.

In fact, one study did show that 200 mg of zinc helped to improve acuity in people with macular degeneration. In another, people who have had higher levels of Vitamin E also had less vision loss than those with lower levels.

In addition to testing and balancing the functioning of the thyroid, Dr. Todd also suggests the following nutritional supplements on a daily basis, in addition to his EYEMAX-plus formula — which contains 33 vitamins, minerals and anti-oxidants.

Although the anti-oxidant vitamins and minerals are important, the body needs zinc, copper, manganese and selenium to help control the free radicals.

Yet, in his analysis of his patients, Dr. Todd has found that 60% are deficient in zinc, 15% in copper, 80 – 90% in manganese and that virtually everyone is deficient in selenium. These deficiencies greatly reduce the effectiveness of vitamins E and C and beta-carotene.

Dr. Todd will not treat anyone who won’t stop smoking cigarettes, and he also recommends drinking only spring water, eliminating margarine and other hydrogenated fats and avoiding laser surgery, if at all possible. (He has found that people don’t respond to nutritional approaches after having had laser surgery.)

When following his treatment approaches, 88% of Dr. Todd’s patients improved vision significantly over a two-year period.

The herbs bilberry (Anthocyanosides) and Ginkgo biloba have been used extensively in Europe for many years to help eye conditions, including macular degeneration. Clinical studies have shown that both can inhibit progressive vision loss. According to some studies, these two herbs appear to work directly on the eye and are more potent than nutritional anti-oxidants.

Bilberry is also used for poor day and night vision, glaucoma and diabetic retinopathy. It has been shown to support the pigmented epithelium of the retina, reinforce the collagen structures and prevent free radical damage.

Ginkgo biloba increases the blood flow to the brain. European studies demonstrate impressive results in the treatment of macular degeneration and this herb has also been shown to prevent free radical damage to the retina and macula.

The state of eye health is intimately tied to the state of your overall health. Interestingly, many of the nutrients that promote eye health also have benefits for the rest of the body, so anything you do for your eyes will also help you in other ways. Conversely, the steps you take to benefit your body will also promote better eye health.

About Martin Sussman:
Martin Sussman, an internationally known expert in holistic vision care, is the author of five books, audio courses and DVDs, including the #1 best-selling The Program for Better Vision and the Read Without Glasses Method(for middle age sight). He is the founder and president of the Cambridge Institute for Better Vision, which he established in 1977.

The nutritional formula for vision he recommends, EYEMAX-plus, is available at a special discounted price through his website, www.BetterVision.com.