The 5 DANGEROUS Fish to Avoid? The #1 Safest Omega 3 Source? 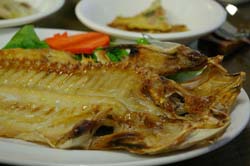 Want a safe fish to eat? Don’t start with tilefish!

Fish is a heart healthy choice of food, high in the omega 3 severely lacking from most people’s diets.

But with the controversial and conflicting reports on the safety of fish, it may be hard for you to make a sound decision on what to do.

And most importantly, what is the best choice for the healthy omega 3 your body needs if you can’t possibly eat all the fish you should be eating?

Well first of all, while no level of mercury is “safe,” considering the average level of mercury and PCBs (polychlorinated biphenyls) in the kinds of fish you consume can help you choose the safer fish to eat.

Generally speaking, levels of mercury and other toxins are highest in older and larger predatory fish, and in marine mammals. With that noted, here are the safer fish, the most dangerous, then the best choice for omega 3…

The 5 Safest Fish to Eat


(based on mercury levels)

Keep in mind that researchers are still trying to figure out the full extent of the negative health effects of mercury exposure. But for now, commercially sold fish are generally considered safe up to 1 part per million (ppm) of mercury in fish.

If you’re in a high-risk group (pregnant women and young children), avoid eating the skin and fatty parts of fish, where contaminants collect.

Based on their low levels of mercury, these are the top five safest fish to eat:

The 5 Most Dangerous Fish to Eat

(based on high mercury levels)

Here are the top five most dangerous fish to eat based on their average mercury levels, starting with the most dangerous. Cut back on consumption accordingly:


You may have noticed that even the safest fish to eat listed in this article still have some small amount of mercury contamination. Yet the omega-3 fatty acids found in abundance in fish are very important for good health.

Research shows that omega-3 fatty acids reduce inflammation and may help lower risk of chronic diseases such as cancer and arthritis in addition to heart disease. Still, nearly 99% of people in the United States do not eat enough omega 3 fatty acids!

If you want to get the omega-3 your body needs without eating a ton of potentially harmful fish, we highly recommended taking an all natural Omega 3 supplement.

6 thoughts on “The Safe Fish to Eat?”