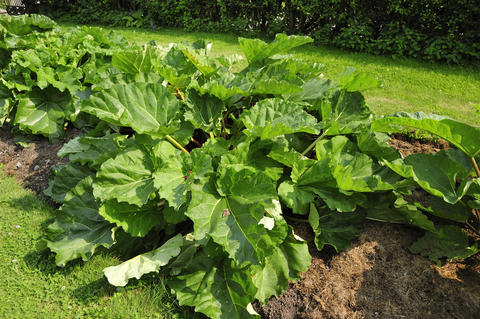 Many have fallen in love with the tangy flavor of rhubarb used to make pie and jam, but the reddish stalks (which are actually classified as a vegetable, not a fruit) are only one part of this amazing perennial plant.

The root has also been prized for its medicinal properties since ancient times. Traditional Chinese medicine, in particular, values rhubarb root as a balancing tonic for your digestive system.

When taken in small quantities, rhubarb has an astringent effect on your digestive system, which means it causes tissues to contract. It helps to purge your bowel of its contents while also cleansing the bowel and removing any bacteria and toxins that might be irritating your gastrointestinal tract. Its astringent properties also make it valuable for alleviating hemorrhoids and inflamed mucous membranes, as well as helping with internal gastrointestinal bleeding.

When taken in larger doses, rhubarb has laxative properties and is known as a natural treatment for chronic constipation due to its natural stimulant and purging actions. However, it’s also used traditionally to help relieve diarrhea, as its astringent properties may help draw water from your stool. Rhubarb root also helps tone your colon, encouraging healthy function, contraction and elimination.

Rhubarb contains polyphenol chemicals that may kill or prevent the growth of cancer cells. Research has shown that eating rhubarb stalks (particularly rhubarb that has been baked for 20 minutes) may help to fight cancer,[i] but the root is also receiving attention for its anti-cancer properties.

Anthraquinones, one of the bioactive family of components in rhubarb root, are known to inhibit cellular proliferation, induction of apoptosis, and prevention of metastasis in cancer cells. Research suggests that “several bioactive anthraquinones of rhubarb possess promising anti-cancer properties and could have a broad therapeutic potential.”[ii]

An extract of rhubarb root has been available in Germany specifically for treating menopausal symptoms for over two decades. The compound has been found to significantly decrease menopause symptoms, including hot flashes, as well as improve quality of life after four to 12 weeks of treatment.[iii]

Another of the active components in rhubarb root, stillbenes, has also been found to produce anti-diabetic effects in animal studies, with research suggesting it may be useful in treating type 2 diabetes and its associated complications.[iv]

Traditionally, rhubarb has been valued as a digestive stimulant that can add tone and strength to your stomach while also helping to cleanse your system of accumulated toxins. Its antimicrobial, antibacterial, antibiotic and antiviral properties also make it ideal for inhibiting intestinal infections and removing intestinal parasites.

For the ultimate cleanse for your colon, which combines centuries of traditional healing wisdom with the very latest advances in the science of digestive health, try Natural Cleanse. Its unique combination of rhubarb root and other herbal remedies like buckthorn bark, ginger root, milk thistle extract and more work to gently flush and revitalize your colon for optimal digestive and overall health.