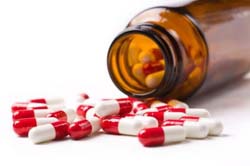 Prescription drug deaths have skyrocketed in the past decade

Is your pain killing you? It may be if you’re relying on prescription drugs to deal with it.

A brand new report released by the Centers for Disease Control and Prevention this week highlights a massive increase in prescription drug deaths over the past decade.

In just the past 10 years, sales of painkillers – and corresponding deaths from prescription drugs – have both quadrupled. By the CDC’s own admission, the problem has reached an epidemic level.

Here’s the ugly truth… the problem starts right at the doctor’s office.

According to this week’s CDC Morbidity and Mortality Weekly Report, there were enough opioid pain relievers sold in the U.S. last year to medicate each and every adult in America with 5mg of hydrocodone every 4 hours around the clock for a month.

We’ve talked before about the pill mills that sell prescription painkillers like candy. Many illegitimate pain clinics are merely fronts set up to sell prescription drugs to addicts. But many “standard care” providers prescribe an enormous number of pain pills too.

For example, a study of California workers’ compensation claims found just 3% of doctors were responsible for writing a whopping 62% of narcotic prescriptions. And get this – half of them were for minor back pain.

We all know narcotics are highly addictive. Talk about a set up for prescription drug abuse. I’m sure the drug companies are crying all the way to the bank.

Listen to me. If you’re relying on prescription painkillers to keep you going, you’re taking a huge risk of addiction and possible overdose. And if you think you’re immune, let me share some of the surprising statistics straight out of the CDC’s own report:

If you thought that was all, you haven’t heard the half of it. That’s because the CDC’s report focused on just the opioid and narcotic drugs. But these aren’t even the worst of the bunch when it comes to dangerous pain pills.

To find out which pain pills top the most dangerous list, you’ll need to get my special report, The 5 Most Dangerous Pain Medications. In it I share which medicines you need to watch out for, why they’re so dangerous, and give my personal recommendation for a much safer, natural alternative for pain relief. And while supplies last, I’m offering it to you for free. You’ll find the link below.

The 5 Most Dangerous Pain Medications

Centers for Disease Control and Prevention. Prescription Painkiller Overdoses in the US. 2011 Nov.