4 Common Parasites & What to Do Now 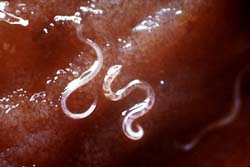 Are you hosting one of these common parasites? You might be surprised!

Common parasites cause major problems for their human hosts — you!

These nasty, disgusting predators live freely inside your body. Only a parasite cleanse will sweep them out. A parasite cleanse can be simple and inexpensive, but you won’t hear Big Pharma talking about it.

It’s much more profitable for drug companies if you remain sick for years without truly understanding why.

Believe it or not, even in “western countries” one of the major causes of pain and suffering are parasites. In fact, here are four of the most common parasites in America… and how you can get rid of them with a painless and near effortless parasite cleanse in as little as seven minutes.

Humans are the only known host for Enterobius Vermicularis … better known as the pinworm. Pinworms are the most prevalent parasite in the United States, affecting 11.4% of all Americans. Worst of all, scientists say there is no hygiene trick you can use to prevent them.

It turns out that these common parasites are everywhere, present in house dust and easily passed from person to person. You can’t kill them with bleach or detergent. Worms can live for 2 to 3 weeks on any moist surface in your house. However, they prefer to live at the end of your large intestine, where their heads attach to your bowels and they eat your nutrients.

Worms live for an average of 13 weeks, with females laying 11,000 to 16,000 eggs in your body per life cycle. Pinworms cause itching and irritation throughout the groin area. An estimated 36% of urinary tract infections in children are connected to pinworms, and acute appendicitis may be caused by pinworm infestations according to the International Journal of Dermatology.

Medication can eliminate the worms, though “minor” side effects start with upset stomach, bloating, diarrhea, and abdominal pain. Most people re-infect themselves continually, making it necessary to take medication in cycles for up to a year to kill the worms without a parasite cleanse.

Giardia Lamblia are one-celled organisms affecting 2.5 million Americans annually according to the Centers for Disease Control (CDC). The small cell cysts in your system begin to cause pain and disease within 14 days.

Giardia cysts are activated by your stomach acid to produce trophozoites that attach to the walls of your intestines. These trophozoites cause malabsorption of nutrients, diarrhea, severe weight loss, and fatigue.

Other symptoms associated with Giardia include depression, arthritis, otherwise inexplicable rashes, celiac symptoms, and gastrointestinal distress. If your immune system is already compromised due to age or an autoimmune disorder, a Giardia infestation can be deadly.

Medication can treat Giardia, but again there are side effects. The ‘first-line’ defense medication, metronidazole, has been linked to central nervous system toxicity and transient leukemia — and the medication doesn’t even kill the cysts! Instead, you have to wait for them to convert into trophozoites and repeat multiple sets of treatments to make sure you’ve killed them off, complete with lab tests to verify the presence or absence of cysts between treatments.

Necator Americanus is America’s own unique species of hookworm. This type of hookworm only lives in human hosts, and the CDC reports that hookworm has become the second most common type of worm parasite in the United States.

Hookworms thrive in moist climates and spread through poor hygiene practices. Inside, not washing your hands after going to the bathroom may spread them. Human fecal matter in soil provides an outdoor resting place for them. Playgrounds, fields, and dirty areas are their home — but they want to come home with you.

Hookworms often get into the body through bare feet — wearing shoes is a preventative measure! If you don’t prevent infection, hookworms will also burrow into your body through your pores, hair follicles, and even right through your skin if they want.

Six weeks after moving in, hookworms are at home in your small intestines. You won’t notice they are there until a large population has developed and symptoms of ill health start to appear.

Hookworms are vampires, feeding on your blood. They cause anemia in adults and have been linked to slow mental and physical development in children. Hookworm infestations also deplete the body’s protein stores and throw off your body’s balance of red and white blood cells.

To kill hookworms without a parasite cleanse, medication is required. The most common medications prescribed for hookworm are albendazole and mebendazole. Albendazole is considered the most effective, but it only works 70% of the time. Repeat treatments and multiple drug cocktails may be needed to clean out this parasite using drugs.

Here’s a creepy statistic — 90% of people affected with Entamoeba Histolytica don’t know they have it. They think they have something else, or just assume they’ll get better soon. Not a good plan, especially since this nasty little protozoa can be fatal. It kills more than 100,000 people annually worldwide.

Entamoeba Histolytica works like Giardia in a system of cysts and trophozoites. It spreads through fecal matter and poor hygiene practices. Outside the body, it can survive for weeks in moist environments.

Internally, Entamoeba Histolytica is a real problem. Trophozoites eat through the mucous walls of your intestines to attack your liver, lungs, and brain. Within 5 months of infection, you can have liver abscesses and burrowing protozoa in your other major organs.

If you’re lucky, you will notice bloody stools and irritated bowels within two to six weeks of getting infected and find a doctor who thinks to test for parasites. Hopefully you will get the right combination of prescription drugs as treatment, though side effects may include hearing loss, kidney damage, and intestinal damage, but at least you’ll be free of parasites.

If you’re not lucky, your irritated bowels will be diagnosed incorrectly as Irritable Bowel Syndrome (IBS). The steroid treatments you’ll likely be given for IBS make Entamoeba Histolytica worse, allowing the infestation to grow and spread dramatically. Or you might be treated for appendicitis, completely missing the real reason you’re sick until things go from bad to worse and you’ve spent a fortune on tests.

What To Do Now

If reading about these common parasites grosses you out, just remember that keeping them in your body is even more gross. But with knowledge is power… and you’re about to discover a parasite cleanse that kills parasites – any or all of them – without the harmful side effects of Big Pharma’s drug “solutions.”

In fact, the parasite cleanse I now recommend to everyone kills parasites with no drugs, nasty concoctions to swallow, or other typical unpleasantries other parasite cleanses force on you. Better yet, it kills off other smaller invaders you deal with day in and day out like harmful bacteria and viruses too.

In just seven minutes you can knock out all the common parasites we talked about today (and uncommon ones too), and in about an hour even wipe out bacteria and viruses hidden away inside them and across your body.

Discover the ultimate parasite cleanse that kills off all of these tiny pain and disease causing invaders without resorting to dangerous drugs by downloading the free report below. 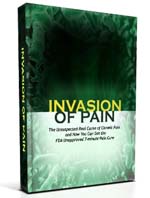 Wipe Out Pain and Disease with the
Ultimate Parasite Cleanse

2 thoughts on “Need a Parasite Cleanse?”