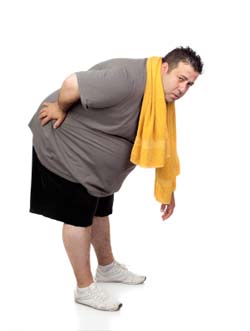 Being overweight can add to your pain

Being overweight or obese isn’t just a pain… it might actually be causing your pain.

If you’ve ever wondered why the Healthy Back Institute® focuses on losing weight so often, it’s for this exact reason: being overweight or obese can increase your pain.

And once you get in the cycle, it’s extremely hard to get out.

Obesity can both indirectly and directly increase your pain. Doctors and patients have known for decades that being overweight or obese can increase your risk for painful conditions like diabetes, arthritis, fibromyalgia and chronic back pain.

But scientists like Dr. Arthur Stone wanted to know if being overweight could be a direct cause of daily pain.

Dr. Stone’s study shows that there is, indeed, a direct correlation between an increasing Body Mass Index (BMI) and daily pain levels. This breakthrough study surveyed over 1 million Americans who were either classified as a Low-Normal BMI, Overweight, or in three categories of Obese. The Overweight group reported 20% more pain than the Low-Normal BMI participants. Obese I reported 68% higher, Obese II 136% higher, and Obese III at a whopping 254% higher than Low-Normal.

Dr. Stone concluded, “People who are obese are considerably more prone to having daily pain.”

Getting older doesn’t help, either. Another study published in the research journal, Obesity, in November 2008 concluded that obese men and women between 55 and 85 years old were twice as likely to have prevalent, daily pain than their peers at a healthy weight. A follow-up performed 6 years from the original study showed that the same participants were as much as 5 times more likely to have daily pain.

You probably don’t need studies to tell you that your pain has increased over time, but that’s no reason to quit.

I’ve found four steps that are guaranteed to help you break the vicious cycle, treat your inflammation (and therefore, your pain), and lose weight at the same time.

I can’t stress how important this is to start reducing your pain and losing weight. There are many excellent resources on anti-inflammatory foods and diets here at the Healthy Back Institute® and elsewhere online. They’ve even published an Anti-Inflammation Diet for Dummies book.

Though you should study this diet in depth, here’s the basic arithmetic of an anti-inflammatory diet:

Green tea has been all the rage lately, thanks to tons of antioxidants that halt inflammation in its tracks. But if you want to really kick your metabolism into gear without the excess caffeine give medicinal-grade oolong tea a shot. Studies show oolong tea can boost your metabolism as much as 10% and burn off fat anywhere from 12 to 43% faster. Drink a cup 15 minutes before eating to improve fat oxidation and reduce insulin spikes.

Another reason to replace coffee with tea: the caffeine in coffee is often excessive, which can lead to increased blood pressure and inflammation. Tea, on the other hand, has less caffeine than coffee but makes up for it with l-theanine, an energizing amino acid that stimulates your alpha brain waves for an “in the zone” feeling. (Plus, there’s no smelly coffee breath. Tea has antimicrobial and astringent qualities that keep your breath fresh.) 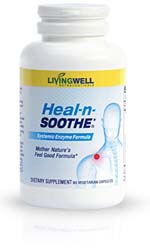 Proteolytic enzymes are key to fighting pain caused by inflammation–but as luck would have it, your natural levels of these enzymes drop significantly as you age. Replacing your enzymes will “eat up” excess fibrin causing pain and stiffness throughout your body.

As a bonus, they will also boost your immune system and cleanse your blood of toxins. Plus, they’re all-natural and completely safe… which is more than can be said for dangerous blood thinners and NSAIDs.

The same enzymes that break down the protein-based fibrin throughout your system will also help break down food you eat for proper digestion if taken at mealtime. So… take them a half hour before or an hour after eating for pain relief, and take them at mealtimes for improved digestion.

4. Jump-Start Your HGH and Start Shedding Pounds Without Exercise

Right now, it might hurt too much to move, let alone exercise. Even a five-minute walk might be too much to ask. That’s why you need an all-natural way to continue to drop pounds without having to move too much.

For this, I strongly recommend trying ThinMist™. It’s a 100% natural, fast-acting and bioavailable spray that you use before you eat. Simply spray three shots under your tongue, wait 30 seconds, then enjoy your body’s dramatically improved fat burning ability thanks to the special amino acids and minerals which help your body naturally create more Human Growth Hormone, used to turbo-charge your metabolism.

As the special formula boosts your metabolism and helps regulate your blood sugar levels you’ll actually feel better and more energetic... without the jitters caffeine and other stimulants bring. This makes it even easier to increase your activity levels to drop excess pounds and finally enjoy the lasting pain relief getting in better shape brings.

Nobre A. L-theanine, a natural constituent in tea, and its effect on mental state. Asia Pacific Journal of Clinical Nutrition. 2008;17 Suppl 1:167-8.