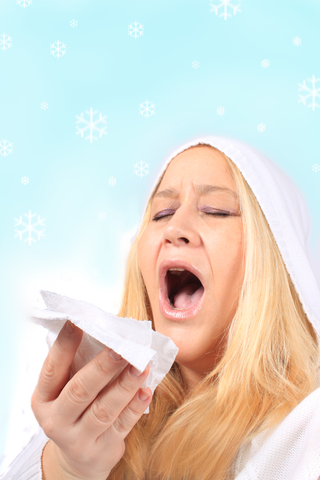 We’re in the midst of cold and flu season, and if you haven’t gotten sick you can either count yourself lucky or be thankful that your immune system is serving you well.

For the rest of you — it’s estimated that Americans get 50 million cases of flu and 1 billion colds a year[i] — you’re probably interested in knowing what you can do to prevent it from happening again, or at least lessen your symptoms if it does. And those of you who haven’t gotten sick certainly want to keep it that way.

As with many infectious diseases, one of the best ways to stay well is to build your defenses naturally by eating a healthful diet … fruits, vegetables, little or no sugar, healthy protein and fat, and so on. You’ll want to keep stress under wraps, too, and make sure you’re getting plenty of sleep. These are the cornerstones to a healthy immune response, which is your first defense against cold and flu.

But let’s assume you’re already doing this. What else can help? Americans spend more than $1.5 billion a year on supplements to help boost immunity to prevent colds and flu, and the market for such natural remedies is growing twice as fast as the market for over-the-counter drugs.[ii] Clearly more are interested in natural options, but what really works?

Zinc has been shown to reduce the length and severity of the common cold, but you have to take it within 24 hours of your first symptoms.[iii] Low doses of zinc taken for five months have also been shown to help reduce the number of colds in children.[iv]

Taking vitamin C regularly may help to (modestly) reduce the length and severity of cold symptoms[v] (although it does not seem to help if you just start taking it once a cold hits). In people under physical stress, such as marathon runners or skiers, regular vitamin C actually cut the incidence of colds in half.

Echinacea, and specifically Echinacea purpurea, may help to shorten the duration of the common cold and lessen the severity of symptoms in adults,[vi] although there is some conflicting research on this.

Beneficial bacteria known as probiotics have been found to help prevent upper respiratory tract infections, including the common cold, as well as possibly reduce the prescription of antibiotics.[vii]

Garlic naturally improves the production of white blood cells and optimizes the efficiency of your antibodies, possibly due to the sulfur-based compounds like allicin, allium and N-acetylcysteine. Garlic has both antibacterial and antiviral properties, and research has shown that those who took garlic every day for three months had fewer colds than those taking a placebo.[viii]

People who exercise regularly get up to 20 percent fewer colds than those who do not.[ix] And in certain groups, such as postmenopausal women, regular moderate-intensity exercise has been found to reduce the incidence of colds even more, by up to 50 percent.[x]

Vitamin D plays a role in your body’s innate immunity, including the prevention of respiratory tract infections like colds and flu, but many are deficient. Research shows that people with higher vitamin D levels are less likely to have recently had a cold or the flu.[xi]

At least one study also suggests that supplementing with vitamin D3 during the winter (when sunlight, your body’s natural source of vitamin D is more likely to be scarce) may reduce the incidence of the flu, especially in school-aged children.[xii]

Elderberry (Sambucus) has traditionally been used for treating both colds and the flu, and research suggests it has “relatively strong defense” against influenza A virus by “stimulating immune response and preventing viral infection.”[xiii] Elderberry extract has also been shown to shorten the duration of flu symptoms by more than 50 percent.[xiv]

Did you know that cold and flu symptoms are a result of your body’s inflammatory response to the virus, rather than the result of the virus itself? Proteolytic enzymes not only have potent anti-inflammatory properties, they also fight viruses and support your immune system.

Proteolytic enzymes are produced naturally by your pancreas and are used by your body to “eat up” scar tissue, cleanse toxins from your blood, fight viruses and improve your immune system, so you’re likely to get sick less often. Unfortunately, your body stops producing optimal amounts of proteolytic enzymes sometime in your late 20s, which is why taking a proteolytic enzyme supplement is a very smart move, especially if you’re in your 40s and beyond.

Heal-n-Soothe is our top-recommended solution, providing you pure and powerful proteolytic enzymes … along with the 11 OTHER most powerful and natural anti-inflammatories to give your health a boost.