Unless you’ve been living under a rock, you’ve heard of acupuncture before. But most westerners might be surprised to learn that acupuncture is more than just getting stuck with needles. 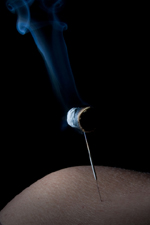 Acupuncture is one of the oldest healing practices in the world. It’s been documented in Chinese medical texts dated as far back as the 2nd Century BCE.

But take the Chinese character for acupuncture and translate it literally into English, and you get “acupuncture moxibustion.”

If you’re like me, you might initially think, “Ok, acupuncture = needles… so what in the world is moxibustion?”

Moxibustion is a variation of acupuncture in which heat is applied to the same acupoints, either directly or via acupuncture needles.

The philosophy underlying acupuncture and moxibustion

In traditional Chinese medicine, the body is seen as a delicate balance of two opposing and inseparable forces: yin and yang. Yin is the cold, slow, or passive principle, while yang is the hot, excited, or active principle. Keep these two balanced and good health is the natural result.

According to Chinese philosophy, everyone is filled with a life force known as qi or chi (pronounced “chee”). When yin and yang principles are in balance, qi is also in balance and evenly distributed throughout the body. Vital qi energy then flows freely and harmoniously along paths called the meridians which connect around 2,000 different acupoints on the body.

Each of these acupoints is believed to affect specific organs or parts of the body. When the body’s qi is unbalanced or its flow is blocked for various reasons, adverse symptoms begin to appear and health is impaired.

According to TCM, disease is nothing more than an internal imbalance of yin and yang, which leads to an imbalance in qi or a blockage in its flow. By stimulating acupoints along the meridian channels associated with the troubled area, acupuncturists aim to restore their patients to health by unblocking the qi flow, correcting any imbalances and allowing the body’s qi energy to return to normal.

What happens during acupuncture with moxibustion?

During a typical acupuncture session, the acupuncturist inserts sterile stainless steel needles into specific acupoints of the patient’s body. Moxibustion takes acupuncture to the next level by applying heat to the acupuncture points.

Moxibustion applies heat to acupoints by burning a small bundle of tightly bound herbs. These bundles of herbs, known as moxa, are made by gathering dried leaves from mugwort plants and forming them into small cone or cigar-like shapes.

The mugwort has a long tradition of healing in European folk medicine. Traditionally used as a healing herb, mugwort was planted along roadways to bring good fortune to travelers in Roman times who would place it in their shoes to relieve aching feet. It was also used in Pagan summer solstice celebrations to bring protection throughout the coming year.

The original practice of “direct” moxibustion in relation to acupuncture originated in the cold, mountainous regions of northern China where a lit moxa cone was placed on the skin directly over acupuncture points. Heating the body in this way was believed to prevent illness and promote healing.

Obviously, this method can be painful and even lead to scarring and is not widely practiced.

“Indirect” moxibustion involves burning the moxa on top of an acupuncture needle or applying heat to needle points from an electrical source. Practitioners may hold the burning moxa above the skin or place a layer of ginger, garlic, or salt on the skin, then place the burning moxa on top of that. This provides a deep, penetrating, soothing heat.

Why not acupuncture alone?

Good question. Acupuncture is powerfully effective with needles alone. According to practitioners, moxibustion is helpful for helping treat spastic colon, menstrual cramps, back pain and colds. It’s even been tried for arthritis and other chronic conditions too.

So far most scientific studies on moxibustion have been set up to include acupuncture, so it’s hard to isolate the cause and effect. This makes it hard to scientifically prove the effect moxibustion alone has on the body.

Come to think of it, researchers still don’t know exactly why acupuncture works, either. But that doesn’t change the fact that it does. In fact, there’s an amazingly long list of conditions where acupuncture is recommended — even in a hospital setting.

Moxibustion has been proven effective at helping prevent breech births

Moxibustion is thought to increase blood flow to the pelvis and uterus making it useful for treating menstrual cramps. It’s also been proven to have an effect on preventing breech delivery of babies by stimulating the baby to move into the correct position for a proper birth.

In 1998, the Journal of the American Medical Association reported on a randomized, controlled, open clinical trial on the use of moxibustion for preventing breech birth. They selected 130 women for both the control and moxibustion therapy groups. All had a diagnosis of breech presentation at their 33rd week of pregnancy.

They found that about 75% of breech presentation babies born to women who received 7-14 days of moxibustion therapy had turned correctly prior to birth while only 47% of those in the control group turned.

Practitioners also use moxibustion to treat inflamed areas, making it particularly useful for treating conditions such as lower back pain. The soothing heat of moxibustion helps relieve stiff muscles and joint pain, serving as a safe analgesic.

Since there are very few contradictions or complications associated with acupuncture and indirect moxibustion, it should certainly be a treatment to consider for your pain relief.

By the way, subscribers to our print newsletter, Get Healthy & Fit, will be receiving a very special DVD featuring acupuncturist John Howard with their March 2011 issue. If you’re not subscribed already, be sure to take advantage of our 30-day free trial to get on our subscriber list. I’ll even throw in a free copy of our Pilates Made Easy DVD just for taking a look.
Click here for the full details

The #1 Mattress for Back Pain

Years of Back Pain Gone in Just Days