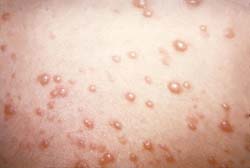 Shingles can cause up to 5 weeks of pain and itchy sores.

Everyone experiences pain in some form throughout their lifetime, many on a daily basis.

Even though pain is a bittersweet alarm, it’s a necessary condition of life.  Without pain, you would never know if something is wrong with your body.

There are some conditions, however, that cause so much pain as to be nearly unbearable.

Pain scales like the Wong-Baker FACES scale and the McGill Pain Questionnaire are particularly helpful for the treating physician… and for defining lists of painful diseases and conditions like this one.

So here is a list of the top 10 most painful medical conditions and diseases that we sincerely hope you never have to face.

A few of these conditions are preventable. Some are only genetic. And others… you’ll just have to pray you never get.

The Top 10 Most Painful Diseases

Shingles is caused by the varicella-zoster virus, the same virus that causes the chickenpox. According to the Mayo Clinic, “After you’ve had chickenpox, the virus lies inactive near your spinal cord and brain.” After several years the virus may become active again, causing a painful abdominal rash in the form of a single row of blisters.

Although shingles is not life-threatening, it’s certainly not enjoyable. The condition cause up to 5 weeks of pain and itchy, open sores.

Shingles is transferrable via direct contact with the open blisters, but only to people who are susceptible to the varicella-zoster virus. There is a vaccination if you choose to accept the risks, but it wears off.

Tetanus is caused by the bacteria Clostridium tetani, spores of which are generally found in soil around the world. The bacteria can enter the body through an open wound. Once infection has begun, the bacteria create a poison called tetanospasmin.

This nasty poison is the reason tetanus makes it on the top 10 most painful diseases list. The poison attacks the body by blocking nerve communications between the central nervous system and the muscles.

The nerve block causes spasms that typically begin in the jaw muscles, causing lockjaw. They then travel to the feet and hands, chest, neck, and abdominal muscles, and finally landing in the back.

Like shingles, tetanus can also be prevented by vaccination if you choose to accept the risks. And again, the vaccine only lasts for awhile.

Pancreatitis is the inflammation of the pancreas – a small gland behind the stomach responsible for producing digestive enzymes and insulin. The condition may be acute or chronic.

An estimated 70% of pancreatitis cases in the United States are caused by excessive alcohol consumption. Others are genetic and some have an unknown cause.

Frozen shoulder is caused by inflammation in the joint capsule, which prevents the shoulder bones from moving.

What’s worse, however, is the vicious circle the inflammation causes. You don’t want to move your arm because of the pain. With decreased motion comes increased stiffness. Increased stiffness causes even less motion. Eventually, the joint becomes so painfully inflamed you can’t move it at all.

The cause of this debilitating condition is unknown, despite how common it has become. Symptoms include chronic, body-wide pain, most especially in the soft tissues such as the muscles, tendons and joints. It affects primarily women between age 20 and 50.

Kidney stones are most commonly caused by dehydration. The kidneys’ primary purposes are to separate waste toxins from the blood and flush them from the body via the urinary tract.

Fail to take in enough liquids and the toxins can easily build up and create sharp crystals. These crystals then stack up on each other to create stones.

A variety of kidney stones exist, however, and may come from other sources such as chemotherapy, gout in men, or a urinary tract infection in women. One novel but highly effective natural treatment for kidney stone pain is Frequency Specific Microcurrent.

This rare condition is characterized by excessive uric acid caused by the body’s inability to process purines, a naturally occurring substance in all the body’s cells.

This is a genetically inherited syndrome and occurs mostly in young boys. Lesch-Nyhan sufferers may have to be restrained to reduce self-destructive behavior. They frequently require a wheelchair to get around.

Dercum disease is a rare condition primarily found in postmenopausal, obese women. According to Dr. Marjan Yousefi of the Geisinger Medical Center, “The pain is out of proportion to the physical findings and is often described as ‘all fat hurts.’” The pain appears to be caused by multiple fatty deposits that compress body-wide nerves. It is widespread and chronic pain that worsens with increased fatty tissue and hormonal cycles.

This terrible infection is caused by one of the five strains of the Ebola virus. Its onset is sudden and causes fever, body and joint aches in the first few days. These symptoms are followed by diarrhea, vomiting, stomach pain, and internal and external bleeding.

Outbreaks of Ebola are sporadic, but the condition is extremely painful. Some patients are able to recover but many affected succumb to this disease. 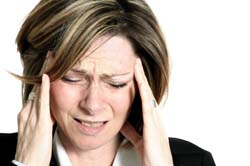 Cluster headaches are widely considered the worst pain a human can feel.

Cluster headaches are considered by many to be the worst pain a human can feel. This condition, also called “suicide headaches,” is characterized by sudden onsets of excruciating pain in or around the eyes or on one side of the head.

The pain occurs in cyclical patterns or “clusters,” hence the name. The period may last for weeks or even months, followed by sessions of remission in which no headaches occur. Cycles may be predictable, in that they occur during the same period every year.

Cluster headaches differ from migraines in that sufferers “usually avoid lying down during an attack, because this position seems to increase the pain.” The pain does not linger like a migraine either. Sufferers report the pain leaves almost as soon as it happens, but leaves them completely exhausted.

You may have noticed a recurring factor in many of these diseases and conditions. They’re either caused by inflammation or increase the level of inflammation in your body.

That’s not unusual. Inflammation is your body’s natural response to an irritant or injury. Without it, day-to-day injuries or infections would never heal.

But sometimes your body fires up the inflammation and simply cannot stop. Extreme conditions like the ones listed above, poor lifestyle decisions and even getting older can make it hard to end the inflammatory cycle.

As you might expect, more inflammation often means more pain. It also increases your risk of numerous painful and dangerous diseases and conditions like high blood pressure, heart disease and many of the painful diseases listed above.

Many painkillers are also anti-inflammatories. That’s because doctors know inflammation is often behind the pain. But those painkillers rarely solve the underlying problem – they only block the symptoms.

A better approach is to take steps now to naturally eliminate excess inflammation from your body. Here are three of the best ways to do that:

3 thoughts on “10 Most Painful Diseases You Can Get”