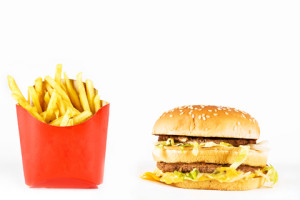 McDonald’s fries may literally be full of crap … and, possibly even worse, pollution! One of the company’s supplier of frozen French fries — J.R. Simplot’s China processing unit – was fined more than $600,000 for water pollution.[i]

Beijing Simplot Food Processing Co Ltd was apparently discharging wastewater with contaminants that exceeded allowable levels; the violations were discovered by a local regulator. The Beijing company was set up as a joint venture with McDonald’s, which holds a 5 percent stake.[ii]

Simplot has reportedly implemented a corrective action plan, but the fine is only the latest blow to McDonald’s and other fast-food giants. In China, sales at McDonald’s and KFC dropped in 2014 after a media report showed workers at one of their suppliers using out-of-date meat and meat dropped on the floor and tampering with production dates.[iii]

And here’s more food for thought … when Dateline took cameras undercover to find out what was going on behind the scenes at top fast-food chains, the findings weren’t pretty.

Dateline investigated 1,000 U.S. fast-food restaurants and came up with 1,755 critical violations, which are those that inspectors believe could be hazardous to your health. A sampling of the violations included:[iv]

Dateline’s investigation was released in 2005, so you might argue that things have improved since then. However a 2014 investigation into fast-food restaurants like KFC, Subway, Wendy’s and McDonald’s in Canada found numerous serious violations, including failure to keep food at safe temperatures, food handling and handwashing problems, pest infestations, cross-contamination and problems with kitchen cleanliness.[v]

It’s not only fast-food restaurants that pose such risks. Similar violations have been reported at North American arenas and stadiums as well, for instance. An ESPN investigation revealed critical or major health violations at 28 percent of the venues tested, including toxic chemicals stored near food-preparation sites, slime in ice machines and problems with food temperature.[vi]

The idea here isn’t to scare you to the point that you can no longer enjoy a hot dog when you go to the ballpark. It’s simply to be aware that buying convenience food sometimes comes at a steep price, and even if you don’t end up getting sick, there’s a definite yuck factor involved. Plus, even “healthy” fast food meals usually aren’t …

One of the best choices you can make for your health and that of your family is to think about where your food is coming from and, ideally, know where that is. If you frequent farmer’s markets and food coops, you can find food picked within days and have a conversation with the farmer who grew it. When you eat at McDonald’s … it’s virtually impossible to know where your food actually came from and what, aside from the food additives, might be lurking in it.

Medications can be similar to food in that regard, in that you’re at the manufacturer’s mercy to tell you what’s really inside, and they can have unintended consequences when taken. Next, read the 5 Most Deadly Pain Medicines You May Think are Safe …

1 thought on “Caution: McDonald’s Fries May Literally Be Full of Crap”