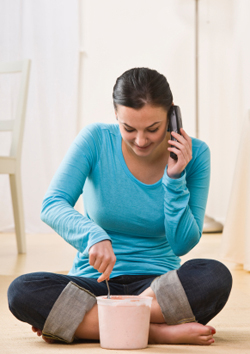 Your personal food weaknesses … you know, those goodies you just can’t stop eating because they taste so good?

Well it’s not your fault. Really!

Instead, blame your brain.

Known as “hedonic hyperphagia,” this deep brain reaction to food practically forces you to eat every last chip in the bag. It drives you to gobble up every cookie in the box … all the cake on the dessert table … and even that second (or third) helping at dinner.

If you don’t know what’s going on, you can feel out of control and depressed, like you’ll never be able to be in control of your diet or your waistline.

But there’s no need to feel hopeless. Science has pinpointed the problem, which means you can use scientifically proven systems to fix it.

All it takes is a little know how and the right tools … which I’m going to give you right here.

What do you call it when you eat more than you need? Pigging out? Stuffing your face? Eating yourself silly?

There’s a hundred expressions for overeating, but scientists have a new one: Hedonic Hyperphagia.

That’s the technical term for eating to excess. But it’s not just being a greedy pig … It turns out your brain releases certain chemicals when carbs, sugars and salts are on your tongue. Those chemicals flood your body with a feeling of happiness and joy.

It works just like flipping a switch — and the next thing you know, you’re in an eating frenzy.

Scientists have compared it to being an addict on a bender. Your brain is pumping reward and pleasure chemicals into your nervous system, removing your ability to stop putting food in your mouth.

Drowning in the feeling, you’ll inhale all the ice cream in the tub and stuff fudge down your face. While you may be shocked and appalled when you’re finished, in the moment, you’re very much out of control.

The worst part? In repeated lab tests, scientists have found that some of the biggest junk food superstars — chips, candy bars and chocolates — have the power to flip the hedonic hyperphagia switch faster and harder than regular food.

So despite your best intentions, certain food triggers will totally override your rational control system, destroying your will power. The result is binge eating, extra inches and unwanted pounds.

Can You Beat The Urge To Eat More?

Your urge to eat more … and keep eating long past the point of fullness … is a brain thing.

It’s wrapped up in your limbic system and your prefrontal cortex, driven by hormones, instincts and neurons.

So how is a regular human being supposed to fight back against their own brain?

You know what doesn’t work. High priced gym memberships, expensive diet foods, fad eating systems … all those things are no match for your brain.

Pop one chip in your mouth and flip the switch of hedonic hyperphagia and there isn’t a gym membership in the world that can stop you from finishing that bag. A single chocolate chip may be the trigger that kills weeks of disciplined eating.

And even if you’re trying hard and being extremely disciplined, the additives in modern food are like traps waiting to mess you up.

So do you just give up? It is hopeless? Can you never again taste of the foods you enjoy most?

Absolutely not! You just have fight fire with fire … or in this case, fight hormones with hormones.

Beat Food Craving Hormones At Their Own Game

Your cravings and all the mechanisms behind the binge eating of hedonic hyperphagia are driven by hormone response.

But hormones are reactive … they react to foods … and they also react to other hormones, even in trace amounts.

So to stay in control of your eating — to be able to put down a box of cookies before it’s gone — you need to arm yourself with energized hormones to keep that switch in your brain from going off.

And it can be as simple as spritzing the bottom of your tongue with our proprietary weight loss spray, ThinMistâ„¢.

Built from a strong foundation of vitamins and minerals, ThinMistâ„¢ restarts and revives your body’s fat burning youth hormones. These hormones have the ability to rewire how your body reacts to food, blocking fat storage and jump starting your metabolism.

As you age, these hormones naturally diminish, leaving your body vulnerable to incoming fat and making a hedonic hyperphagia incident downright deadly for your waistline.

But, when by spraying your mouth with ThinMistâ„¢ before meals and snacks, you shift how your body responds to the food coming your way. You turn back the clock and drive your brain to do the right thing for your body …

… helping you put down that bag of chips and walk away from that bowl of candy.

It’s simple science. Don’t you think it’s time to get science on your side?

Now Get Our Best-Selling Package at Our Best Price Ever!

ThinMistâ„¢ supports fast, natural weight loss by giving your body the nutritional building blocks and natural hormone precursors it needs to curb cravings, burn calories faster and help you replace unsightly fat with lean muscle. It’s guaranteed to work for you or your money back!