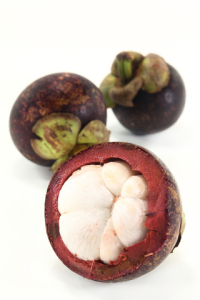 In the US, the most popular fruits (in order) are bananas, apples, oranges, grapes and strawberries.[i] These certainly have merit – for taste and nutrition – but there’s a whole world out there … and in it quite a few exotic fruits that you might not have heard of. If you’re looking for a new treat, try these seven delicious – and nutritious – exotic fruits.

Native to South America, cupuacu is a melon-like fruit that’s been a staple food for rainforest natives for centuries. It’s now considered a delicacy in many larger cities, like Rio. When you split open a cupuacu, you’ll find a creamy pulp inside that’s used to make juice, smoothies, jam and even ice cream.[ii] Its flavor is probably unlike anything you’ve ever tasted – a mixture of chocolate, banana, pineapple, pear and passion fruit.

As a member of the theobrama family (like cocoa), cupuacu is rich in antioxidants and other phytonutrients. It is known for having caffeine-like effects, i.e. enhancing energy, even though it contains no caffeine. It also contains B vitamins, vitamins A and C, calcium, selenium and fiber, and is said to support immune system health, healthy skin and hair, and even improved libido. Many in the Amazon reportedly refer to cupuacu as “the pharmacy in a fruit” because of its many health benefits.[iii]

Crack open the thorny ‘shell’ of a durian and you’ll find a custardy yellow-white flesh inside (this is the edible part). These large fruits, native to Malaysia and Indonesia, are known as the “king of fruit” because of their impressive appearance, although you’ll either love it or hate it. Durians have a strong odor … some describe it as rotten onions or dirty socks (it’s so strong that durians are banned from Singapore subways).

Still, many love its sweet almond-like flavor, and if you’re among them you’ll gain many benefits. Durians are rich in antioxidants; one study found them to be higher in antioxidants than mangosteen (see below), lychee and mango.[iv] They’re also one of the only fruits that are an excellent source of healthy fats (like avocado), and they also contain fiber, potassium, B vitamins and tryptophan.[v]

If you’re able to get past its hard purple shell and cut one open, the inside of a mangosteen (pictured) is filled with citrusy, peachy, mango-flavored flesh separated in segments. (Each fruit has small petals on its base, which correspond with the number of segments inside.)[vi] Use a small spoon or fork to scoop the white flesh, rather than eating it whole, as sometimes there is a hard bit inside.

The mangosteen rind (which is often incorporated into mangosteen juice) is rich in xanthones, which have antioxidant, anti- tumor, anti-allergic, anti-inflammatory, anti-bacterial, anti-fungal, and anti-viral activities.[vii] Mangosteen flesh is also full of antioxidants like vitamin C and may even contain cancer-fighting compounds.[viii] Mangosteens are native to Southeast Asia.

Jabuticaba is a grape-like fruit native to South America. The fruits grow right from the trunk of the tree, and, like grapes, are used to make wine and jams (they’re also eaten fresh). Jabuticaba is thought to contain many of the same beneficial properties as grapes and cranberries, including anti-aging, anti-inflammatory and antioxidant effects.[ix] They also contain jaboticabin, a recently discovered type of antioxidant.

The rambutan is another Southeast Asian fruit that’s rich in antioxidants, including vitamin C, and copper. The outside rind has long hair-like tendrils, which is peeled away to reveal a sweet-sour grape-like flesh.[x]

This South American fruit is green on the outside with a white, creamy flesh filled with black seeds. Only the white flesh is edible, and it was described by Mark Twain as “the most delicious fruit known to men.”[xi] Cherimoya has a flavor similar to strawberries, bananas, pineapple and coconut. It’s rich in fiber, potassium, vitamin C and B vitamins. Cherimoya has traditionally been used for anxiety relief, and one study found it “produces an antidepressant-like action” and may have “therapeutic potency as an antidepressant agent.”[xii]

Although native to West Africa, the ackee is cultivated in Jamaica, where it’s the national fruit. On the outside ackees are bright red in color. When they’re ripe, they open, revealing yellow “brain-like” flesh and large black seeds. Only the yellow flesh is edible (and even then, only when the fruit opens by itself … unripe ackee is poisonous and eating one before it opens by itself may cause severe vomiting and hypoglycemia). Also, although ackee is a fruit, it’s eaten more as a vegetable (often cooked alongside fish and spices. Once cooked, the fruit turns bright yellow and resembles scrambled eggs in texture.

Why eat ackee? It’s rich in fiber, B vitamins and vitamin C, along with the heart-healthy monounsaturated fat, oleic acid (the same kind find in olive oil). Given its rich content of oleic acid, researchers noted “Consideration should be given to potential protective health effects of diets which include ackee.”[xiii]

1 thought on “The Top 7 Healthy and Delicious Exotic Fruits”