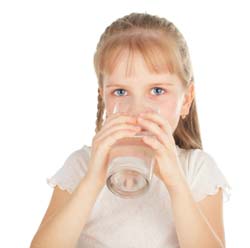 It’s in food. It’s in beverages. It’s in baby formula. It’s in the toothpastes, mouthwashes and other oral care products you use on a daily basis.

And chances are it’s in your drinking water, too.

Fluoride, or what scientists are calling “an emerging neurotoxin,” is present in the drinking water of over 204 million Americans… whether they’re aware of it, or not.

Just this month, the city council in Portland, Oregon infuriated many members of the public as they unanimously voted to start fluoridating public drinking water for nearly a million residents despite numerous pleas against it.

There are some benefits to fluoridating water… but do they outweigh the consequences? And shouldn’t you have the choice to decide for yourself if you want to take the risk rather than accepting forced medication?

With all the ongoing uproar, let’s take a look at the purported fluoride benefits and fluoride dangers we currently know about…

The Top 2 Benefits of Putting Fluoride in Water:

Beginning in the 1930s, dentists discovered that tooth decay is significantly reduced when the mouth and teeth are continuously exposed to fluoride. According to the Center for Disease Control and Prevention (CDC), fluoride can also become concentrated in plaque and saliva through constant exposure, which helps “prevent the breakdown of enamel minerals.”

The easiest and most common way to ensure consistent exposure was through fluoridating water.

When compared with fluoridated oral care products, dental care and fluoride daily supplements, fluoridated drinking water is by far the most cost-effective. It costs about $.50 per person to fluoridate water.

According to the Center for Disease Control and Prevention, it also saves approximately $38 in dental costs per person. “An individual can have a lifetime of fluoridated water for less than the cost of one dental filling,” explains the American Dental Association (ADA).

In a community, this is considered beneficial because not everyone may have dental insurance or open access to dental care.

Proponents of putting fluoride in water are probably applauding these two benefits. But here’s the problem – when you add fluoride to the entire public drinking water supply everyone gets medicated whether they want to or not.

And just like virtually any other time man tries to mess with nature, there are serious dangers and consequences to putting fluoride in water.

1. Impact on cognitive development in children

Over 23 human studies and 100 animal studies have concluded that fluoride is linked to brain damage.

One specific study cited in the Portland struggle was released from Harvard’s School of Public Health just this summer. The study showed that Chinese children who were exposed to fluoride naturally in their drinking water had significantly lower IQ scores than other children where fluoride concentrations were lower.

The study concluded that extensive fluoride exposure could be toxic to the brain, especially in developing children.

Want to know the worst part? Your dentist has known that fluoride is dangerous for children since 2006! (But did your dentist tell you?)

Drinking water isn’t the only place where people come into contact with fluoride. Many other foods, beverages and even infant formulas also contain fluoride. Not to mention the toothpaste, mouthwash and other oral care products we use on a daily basis.

Excessive exposure to fluoride actually damages the teeth, discolors them and causes them to rot from the inside out.

A 14-year-old study from Harvard University showed that the highest rates of osteosarcoma occurred in populations drinking fluoridated water.

The most likely reason? Fluoride tends to accumulate in bone cells, especially during growth spurts. Fluoride is a known mutagen, which can cause genetic damage that leads to cancer.

Did you know that up until the 1970s doctors actually prescribed fluoride to suppress the thyroid? The National Research Council (NRC) has reported that not only does fluoride inhibit thyroid function, but it also negatively impacts the entire endocrine system.

There are numerous other risks including kidney disease, dementia, hyperactivity, lethargy, muscle disorders and infertility.

If you decide that flouride’s benefits are not enough to outweigh the consequences, you’re either stuck drinking bottled water forever, purchasing an expensive filter or starting a petition to get fluoride removed from the water in your city.

If none of these sound like your cup of tea, then at least regularly detoxify your body from the build-up of fluoride in your system. And if you’ve been drinking fluoridated water for some time, you need to detox now.

Despite some fluoride water benefits, no excessive buildup of minerals or toxins – regardless how natural – is ever healthy.

Your body has natural defenses to protect it from toxic buildup, but our environment is becoming more and more toxic on a daily basis. And that’s NOT an exaggeration.

It’s more than enough to keep your body in a constant state of toxic shock.

You can see that helping your body detox is just as important as staying hydrated and getting enough sleep. But how can you manage it?

It’s not as difficult as you may think. In fact, it can be done in just three days.

Discover the Natural Way to Boost Your Body’s
Natural Defenses Against Built Up Toxins!

6 thoughts on “Fluoride in Water: 2 Benefits and 4 Big DANGERS…”