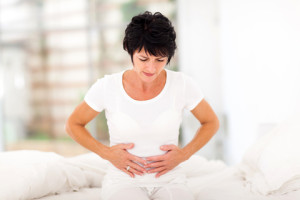 The endometrial tissue thickens, breaks down and bleeds with a woman’s menstrual cycle, and this occurs whether it is in your uterus or outside of it.

Endometrial tissue outside of your uterus has no way to exit your body, so the shed tissue and blood become trapped, causing inflammation and the formation of scar tissue.

As explained by the U.S. Department of Health and Human Services Office of Women’s Health:[i]

“Every month, hormones cause the lining of a woman’s uterus to build up with tissue and blood vessels. If a woman does not get pregnant, the uterus sheds this tissue and blood. It comes out of the body through the vagina as her menstrual period.

Tissue and blood that is shed into the body can cause inflammation, scar tissue, and pain. As endometrial tissue grows, it can cover or grow into the ovaries and block the fallopian tubes.

Trapped blood in the ovaries can form cysts, or closed sacs. It also can cause inflammation and cause the body to form scar tissue and adhesions, tissue that sometimes binds organs together. This scar tissue may cause pelvic pain and make it hard for women to get pregnant. The growths can also cause problems in the intestines and bladder.”

What are the Symptoms and Causes of Endometriosis?

Pelvic pain is the most common symptom reported, especially with your menstrual period – and the pain tends to get worse over time. Other likely signs and symptoms include:

The causes of endometriosis are unknown but one theory suggests menstrual blood that contains endometrial cells may travel the wrong way, flowing back through your fallopian tubes and into your pelvic cavity, where they continue to grow.[ii]

You’re more likely to develop endometriosis if you have a family history of the disease, have never given birth, have a history of pelvic infection or uterine abnormalities or have a medical condition that prevents menstrual blood from passing normally from your body.

That being said, endometriosis is also considered an inflammatory condition, as inflammation plays a key role in its progression. According to one study:[iii]

“Inflammation is considered to play a role in the pathogenesis of endometriosis … [and there is a] hypothesis that pain and endometriosis stage are related to the degree of local and systemic inflammation.”

Nonsteroidal anti-inflammatory drugs (NSAIDs) like ibuprofen (Advil, Motrin) or naproxen (Aleve) are often recommended to treat endometriosis pain and inflammation, but NSAIDs, including even over-the-counter options like aspirin, are notorious for being hard on your gastrointestinal tract, leading to potentially fatal side effects such as bleeding in your digestive tract, ulcers and perforation of your stomach or intestines. And this is only one of the potential side effects.

They also do nothing about the cumulative scar tissue or hormonal imbalances that are often a part of endometriosis.

This is why surgery and hormone therapy (such as taking birth control pills) are often recommended, especially if your symptoms are severe.

Yet, even with surgery, there is no ‘cure’ for endometriosis, and your symptoms may come back. Hormonal therapy is also problematic for many women due to side effects like weight gain, bone loss, depression and more.

If you have a condition like endometriosis, systemic enzyme therapy should be your go-to treatment, as it works on multiple levels to help you heal and relieve symptoms. Systemic enzymes help to both reduce inflammation and break down scar tissue (including fibrin, which makes up scar tissue).

They may even help your body to get rid of foreign tissues. Holistic health care practitioner Hethir Rodriguez C.H., C.M.T. explained:[iv]

“Systemic Enzyme Therapy is one of the best and most effective natural therapies for endometriosis. Systemic enzymes may help to reduce the scar tissue and breakdown the excess tissues left from endometriosis.

Systemic Enzyme Therapy may also aid women who have endometriosis by reducing the inflammation caused from the scar tissue irritating the surrounding organs and may help with the pain that sometimes comes from having endometriosis.

The blood cleansing actions of this therapy help to bring proper circulation to the reproductive system and get the “stagnant blood” cleared out, bringing fresh oxygenated blood to your uterus and ovaries.”

There are actually more than 3,000 enzymes in your body, each with a specific function. You cannot survive without them, as enzymes act as catalysts for countless biological changes that take place in living organisms.

Systemic enzymes are unique because they enter your bloodstream, where they are able to target multiple pathogenic processes in your body (unlike drugs, which typically only target one). As mentioned, in the case of endometriosis this includes relieving inflammation, breaking down scar tissue and other excess tissue, and helping to cleanse your blood for better circulation.

So please don’t believe that medications are the only hope for living with endometriosis. Other options, like warm baths, heating pads and regular exercise may help to relieve your pain without the side effects of drugs, but even then … only proteolytic enzymes like Heal-n-Soothe target the underlying factors causing endometriosis symptoms, and may ultimately help your condition to improve (while also fighting pain and inflammation).

[iv] Natural Fertility Info, How to Use Systemic Enzyme Therapy to Increase Your Fertility