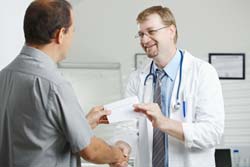 Does your doctor give you medicine because you need it, or because Big Pharma paid him off?

If you’re not already asking this question, you should be. Drug company propaganda techniques shape both healthcare law and private physician practices.

What happens in the examination room could very well be dictated by lobbyists, sales reps, bribes and payoffs — things that have nothing to do with preserving your good health.

Sound far-fetched? Wondering if maybe I’ve been reading too many conspiracy theory books on my weekends? Look at the numbers!

In 2011 alone, pharmaceutical industry lobbyists spent more than $150 million to keep their interests front and center before government leaders.

And at your local doctor’s office Big Pharma is a major player. Since 2004, promotional spending by Big Pharma has averaged $61,000 per physician. In terms of reaching out to you directly, in 2010 alone pharmaceutical companies spent $1.03 BILLION in online advertising to US consumers (not to mention TV, radio and print advertising).

Drug companies aren’t spending more than the GDP of New Zealand on advertising without expecting some kind of return on their investment. Can you guess what it might be?

Drug company propaganda techniques are extremely sophisticated, leveraging advanced techniques to change the medical landscape. It’s big business for them — US spending on prescription drugs jumped from $40 billion in 1990 to $234 billion in 2008 — but bad business for you.

Want to know how they’re digging deep into our pockets? Here are the three propaganda techniques to beware of most as you watch out for Big Pharma’s tricks.

Schmoozing With Your Senator

One key propaganda effort of Big Pharma is to schmooze with your Senator. This includes flying them to “conferences” in tropical locales, paying for that swank lunch at a five star restaurant and bringing in food and gifts to meetings or lobbying sessions.

Of course, their real goal is to convince your representative in Congress to sponsor or approve healthcare legislation points with the spin that these measures are good for the nation’s overall health profile.

You have to give drug companies credit for being thorough with their schmoozing, though. Last year, 274 members of the House of Representatives each received an average contribution of $8,483 to their campaigns or causes from pharmaceutical lobbyists. In the Senate, 68 members of Congress received an average of $13,934. Oh, and that’s in addition to the $150,110,807 spent by 866 lobbyists buttering up 122 political clients.

Remember, those figures represent the spending from just the past year — but since 2008 Big Pharma has spent more than $600 million lobbying your elected officials. Interesting that this time period just happened to coincide with the passage of the largest healthcare overhaul in our nation’s history. Funny coincidence, right?

This continual lobbying effort also seems to keep much of the rising fraud and wrongdoing in the pharmaceutical industry out of the headlines.

Over the last 20 years, there have been 165 settlements totaling $19.8 billion between the government and pharmaceutical firms over violations of the Fraud Claim Act, illegal promotion of off-label uses of drugs and deliberate overcharging of patients in Medicare and Medicaid programming.

The pace and size of settlements has increased dramatically in the last five years, putting drug companies ahead of defense companies in their legal battles with government agencies over costs.

Yet these crimes aren’t what we hear about in the news. Instead, our headlines praise historic legislation and accords that mandate more government involvement and pharmaceutical regulation in our lives. It’s a good thing for all of us, according to our Senators and Representatives — but if the money went away, would they still sing the same tune?

Paying Off Your Doctor

Your doctor influences your decisions about your health… but who is influencing your doctor?

Chances are your doctor has received repeated visits from pharmaceutical reps, been invited to dozens of drug company sponsored conference events or even received direct payments for endorsing or participating in drug studies.

Speaker fees, referral fees, comped vacations… they all add up to more than $61,000 per year per doctor in promotional spending by Big Pharma, nearly 25% more than those same drug companies spend on research and development.

Promotional spending pays off for Big Pharma with return on investment (ROI) numbers that would make your banker jealous. Average ROI for every $1 in promotional spending with physicians is $1.72 in drug prescription revenues for basic medications… but can skyrocket as high as $10 for every $1 spent for the most aggressively marketed drugs.

Plus, each $1 spent sponsoring a conference or continuing education event generates $3.56 in sales, while the ROI on a single ad page in a medical journal brings home $5 for every $1 spent.

Doctors deny they are influenced by all this marketing, but the numbers don’t lie. Their advice and prescription habits change – significantly – after the drug companies get in touch. What you’re told is best for your condition may actually just be what’s best for Big Pharma — so always ask your doctor for a specific reason why a given medicine is the right choice for you.

Breaking Into Your Living Room

The most insidious pieces of propaganda from drug companies don’t hit Congress or your doctor — they’re aimed directly at you.

By advertising in popular magazines, TV commercials and running online ad campaigns, drug companies are breaking into your living room to sell their side of the story to you when you least expect it.

Ads for “performance enhancing” drugs air during football games while Larry the Cable Guy hawks heartburn relief during primetime. Browse most websites for something like back pain and watch those banner ads suddenly switch over to promotions for the latest trendy painkiller. Beauty magazines sell ad space for Botox and glossy fitness pages shine with inserts for joint pain and anti-aging drugs that supposedly help you keep going longer, stronger and faster.

Magazines, newspapers, TV shows, and online promotions make up the ever-expanding world of direct-to-consumer (DTC) marketing by pharmaceutical ad agencies. The ads have a strong propaganda angle — happy, healthy people who’ve found that the one thing they’ve needed in life actually came in the form of a pill. This pill. The pill you need to “ask your doctor about” at your next appointment. (Hurry, grab the phone Martha!)

Constant and consistent, DTC messaging is the latest goldmine for Big Pharma. You need to watch out for propaganda that emphasizes the benefits of prescription drugs while glossing over the many and deadly side effects of a lifetime on medication.

You need to stand strong and make yourself an informed consumer. The current wave of DTC advertising is just getting started. Looking only at online advertising platforms, drug companies are forecast to increase annual spending by 80 percent to $1.86 billion – in just the next three years. And that number represents only 4.2% of the market… the tip of a very massive iceberg.

Drug company propaganda is going to be everywhere you look, trying to win you over to the belief that all your problems are can be solved with a pill.

Don’t buy the lies — look for real answers and natural forms of pain relief instead… so next up … discover how the pain relief industry is trying to CON you, and the smarter solution instead, in… 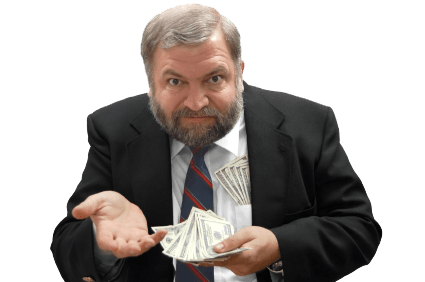